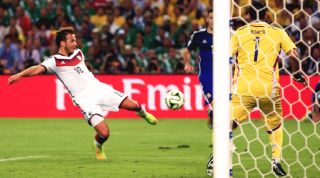 You have five minutes to guess 21 players - we're not counting own goals or goals scored in penalty shootouts.

THEN TRY Quiz! Can you name every Premier League club of the noughties?

When Andre Schurrle assisted Mario Gotze for Germany's World Cup-winning goal in 2014, it was a special moment - but for a number of reasons.

This was Germany's first world title since reunification in 1990. After 24 years - including some near misses - this was finally all that work coming together.

Schurrle and Gotze both made their debuts together, coming on as substitutes at the same time against Sweden in 2010. With their simultaneous appearances, the pair became the first two German international players to be born in reunified Germany. It's pretty symbolic that Gotze and Schurrle combined for reunified Germany's first World Cup.

Today is Mario Gotze's 28th birthday. His stock might have dropped but he's still in an elite club with other international final scorers - can you name the others since 2000?