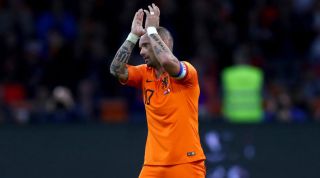 Dutch winger Wesley Sneijder has called time on a career in which he won league titles in the Netherlands, Spain, Italy and Turkey – including winning a historic treble with Inter Milan.

He also leaves the game as the most-capped Dutchman of all time, having represented the Oranje 134 times over a period of 15 years between 2003 and 2018.

In that time he's shared a dressing room with some of the country’s all-time greats – but how many of them can you name?

Below, you’ll find a list of the 25 players who've played with Sneijder for the Netherlands. We’re giving you the number of times they shared the pitch and each player’s position – and all you have to do is tell us who they are.

There’s seven minutes on the clock for this one. Once you’ve got as many as you can, send us a screenshot of your score to @FourFourTwo and challenge a mate who’s got a wardrobe full of Ajax shirts.

QUIZ! Can you name the last 50 players to score a Premier League hat-trick?