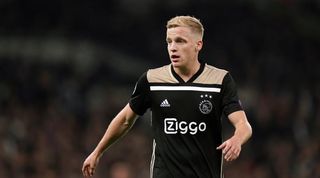 In a report by De Telegraaf, Ten Hag was quoted commenting on the midfielder's future.

He was backed up by his Real Madrid counterpart Zinedine Zidane, who said in his press conference that "no one else comes" this summer.

There is reportedly a belief, however, that Real Madrid could yet come back for Van de Beek if Zidane thinks they require midfield reinforcements before September.

With a move for Manchester United's Paul Pogba seemingly dead in the water, Madrid may yet be tempted by a late swoop for Ajax's 22-year-old.

It's not just Cristiano Ronaldo... 10 more of football's craziest commercials

Adrian, the fan and 10 of football's weirdest injuries