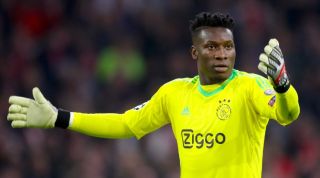 The 23-year-old enjoyed an impressive campaign with the Dutch giants last season, helping them to a league and cup double and the Champions League semi-finals.

Onana came through the youth ranks at Barcelona after joining the Spanish club’s famed La Masia academy from his native Cameroon in 2010.

And he revealed that he had an opportunity to return to the club he left in January 2015 over the summer.

“Barça came back for me this summer,” he told RMC Sport.

“It’s my home, I was part of that club. They always want one of their own to re-sign.

Onana also revealed that PSG was a possible destination for him at the end of the campaign, before the French champions signed Keylor Navas from Real Madrid instead.

“I had feedback from PSG,” said Onana.

“I had discussions with my agent. He told me of Paris and what he wanted to do.

“What happened remains between professionals. These are the things that are managed with my agent.

“We talked about it several times and he told me that PSG were interested.”

But Onana stayed put and has helped the club start the new season strongly, as they sit on top of the Eredivisie table after 10 games and have won both of their opening Champions League games against Valencia and Lille.