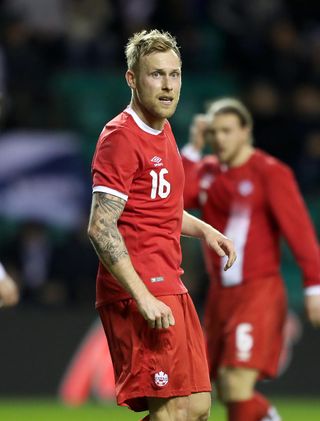 Steven Gerrard expects Scott Arfield and Nikola Katic to hit the ground running when the pair finally touch down to rejoin their Rangers team-mates.

Defender Katic is due to link up with Gerrard’s side at their pre-season base in Portugal this week following Croatia’s exit from the European Under-21 Championships.

Midfielder Arfield also has commitments skippering Canada at the Gold Cup, where his side face Haiti in Saturday’s quarter-final showdown.

But there will be no settling in period once the 30-year-old does clock on, with Gerrard insisting both Arfield and Katic will be expected to take part in the gruelling sessions he has laid on to get his side back in top shape ahead of the new season.

Both men were given some early time off ahead of Rangers’ final game of last season and Gerrard believes they will have had enough rest and recuperation to ensure they are ready to go when next month’s Europa League qualifiers come around.

The Ibrox boss, whose side kick-off their campaign against either Progres Niederkorn or Cardiff Met University on June 18, told Rangers TV: “The reason they weren’t available for Kilmarnock was to try and benefit from that decision now.

“I think it affected us against Kilmarnock as I didn’t really want to change the team too much as we were on a great run with five wins out of five.

“So Katic will come straight back in – he had his three-week holiday before his tournament – and the same with Scott.

“They will have slightly different programmes to the others and it will be a lot easier for them to pick up the speed and integrate because their programme was different at the back-end of last season.”

The latecomers will find six new faces in the Rangers dressing room when they do return.

And so far, Gerrard has been pleased to see his summer buys make a good first impression.

“They have done very well, and I would say every one of them so far has been a positive on the evidence of what we have seen,” he said.

“Both on and off the pitch, they are good people and hungry people who want to come in, contribute and make us better.

“That always sends shockwaves around the squad as people who have been here before realise the competition and the levels are going to go up, and as a manager you are hoping that comes out in results moving forward.

“So the message to the players is to keep pushing as we are going to have options in all the positions and a better quality than we had last season, and that is great news for everyone.”