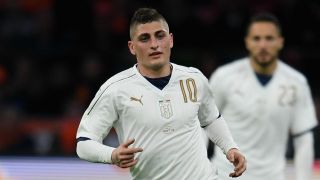 Marco Verratti has told Paris Saint-Germain he is willing to stay at the club and resist a move to Barcelona, but only if they sign "champions" in the transfer market.

Barca are heavily pursuing the Italy international, who had been keen to leave the French capital after a disappointing season where his side failed to win Ligue 1 for the first time in five years and suffered a humiliating Champions League last-16 collapse at Camp Nou.

But Verratti held a meeting to discuss the transfer saga with PSG president Nasser Al-Khelaifi and sporting director Antero Henrique on Thursday, where he was reportedly promised a lucrative new contract and a spending spree of €220million.

And now he is prepared to give PSG a chance to bring in top names and prove there is still a path to Champions League glory with PSG, but will not sign a new deal until they follow up their words with star signings.

"I do not have to go at all costs, but I want to see if they really buy champions this time," Verratti said to La Gazzetta dello Sport.

"If they do, I will be happy to stay. But every year they say they will make a big team and then we have seen the results.

"The promises from PSG alone are not enough, but if this time Henrique keeps to what he says, then I will be happy to stay, no one at all obliges me to leave."

Despite Barca's interest, PSG have been determined to keep the 24-year-old, who signed from Pescara back in 2012.

Verratti's team-mate Marquinhos urged Verratti to stay on Friday, insisting the club's project had not been lost despite a difficult 2016-17 campaign.

PSG's former director of football Patrick Kluivert claimed this week Verratti - who still has four years left on his current contract - wanted to leave PSG, but believes his market value is over €100m.