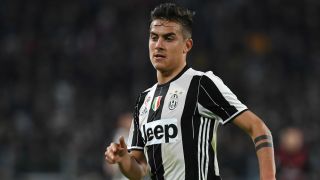 Barcelona are tracking Paulo Dybala but the Liga title-holders expect the Juventus forward will prove difficult to sign if they make a move for him.

Dybala is yet to sign a new Juve contract amid lengthy negotiations, but is still tied to the Italian champions until 2020.

Barca have been linked with a move for the 23-year-old as a potential replacement for Neymar if he were to leave Camp Nou, with reports suggesting Manchester United would be willing to trigger the Brazil international's €200million release clause.

"He is a good player and I cannot say more," Robert said to El Mundo Deportivo when asked about Dybala.

"At Barca we are attentive to all market movements and we have the obligation to be on guard if there is movement of a good player who is also wanted by others.

"Therefore, we will be prepared for any situation. But it is also true what a player is worth and what we have here."

Dybala, Paris Saint-Germain midfielder Marco Verratti and Arsenal defender Hector Bellerin have been among the biggest names linked with a move to Camp Nou once the season is over.

"Those players are under contract with their respective clubs and especially when a player has a long-term contract, it is very difficult," added Robert.

"We are open to bringing reinforcements, to sign a player, and always have in mind the idea of improving the team, but to improve Barcelona's team, especially our first team, it's very difficult because we have a magnificent side.

"We have to give value to what we have – that has always been a great concern of mine. I do not like to say which positions to improve because we have a great team and that also creates a situation that I do not like."

And Robert believes PSG would be unwilling to sell Italy midfielder Verratti.

He said: "With these players it is always a matter of money, and apart from wanting to pay the amount you want, there is PSG not wanting to sell him to you.

"That decision is with the club, not the player. Do you remember what happened to Thiago Silva? PSG would not negotiate with Barca."