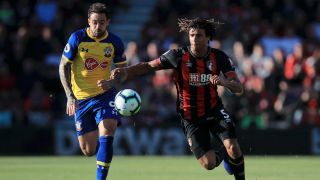 Bournemouth failed to make it three Premier League wins in a row as they were held to a dour 0-0 draw by Southampton at the Vitality Stadium on Saturday.

Eddie Howe's side had beaten Crystal Palace and Watford before the international break to maintain their fine start to the season, but they were unable to find a way past the struggling Saints – who have still won just once this campaign.

Mark Hughes' side had the better of a limp first half, but rarely tested Cherries goalkeeper Asmir Begovic, as Callum Wilson and Josh King cut isolated figures up front for the hosts.

King squandered a fine opportunity to seal maximum points for his side, clipping wide from close range, as the hosts' superb start to the season suffered a minor setback.

After a tepid opening half-hour, Charlie Austin wasted a clear opportunity for the visitors. Instead of shooting, the striker opted to take a touch around the onrushing Begovic, but only succeeded in rolling the ball out of play.

Pierre-Emile Hojbjerg then tested Begovic with the game's first shot on target on the stroke of half-time, unleashing a dipping long-range volley that was well held by the goalkeeper.

Howe's men started the second half with a spring in their step, King flashing a header wide from Jefferson Lerma's teasing cross, but they failed to force Alex McCarthy into a meaningful save.

King then missed a golden chance just after the hour, scuffing wide from eight yards from Wilson's pull back, while Begovic again had to be alert to tip over another long-range volley from Hojbjerg.

Shane Long fired at Begovic late on and Manolo Gabbiadini headed over deep into stoppage time as Southampton ultimately failed to produce a dramatic finale to a game desperately lacking in quality.