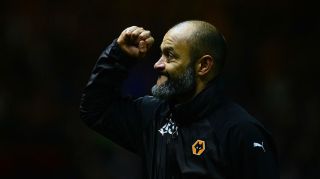 Ryan Bennett's late goal gave Wolves a 2-1 win at Bristol City in a fiery top-of-the-table Championship clash on Saturday to send them 10 points clear, while Derby County picked up a fifth win in six by beating Ipswich Town 2-1 to move up to second.

It was also a positive day for Chris Coleman and Sunderland, as they moved themselves out of the bottom three with a 1-0 win at Nottingham Forest, while fellow strugglers Burton Albion drew 0-0 at home to Norwich City.

Bristol City were by no means the only side in the top five to suffer defeat, though, with Leeds United beaten 1-0 by rock-bottom Birmingham City.

Hull City let a two-goal lead slip at home to Fulham in their 2-2 draw, Brentford beat Sheffield Wednesday 2-0 and Reading were held 1-1 at Barnsley.

They did it the hard way, but Wolves came out 2-1 winners at fellow promotion hopefuls Bristol in a dramatic game at Ashton Gate.

Danny Batth was shown a straight red card early on for a strong tackle, with coach Nuno Espirito Santo also dismissed shortly after for protesting once too often, and when Bobby Reid broke the deadlock just after half-time with a finish from just inside the area, City looked on track for all three points.

But City goalkeeper Frank Fielding was sent off 10 minutes later for foul just outside the box and Barry Douglas hit the resulting free-kick beyond Luke Steele in the net.

And Wolves snatched the win deep into stoppage time, as Bennett – initially brought on in response to Batth's dismissal – headed in from close range.

Full time and Wolves run out 2-1 winners at . Came from behind through goals from and Ryan Bennett to take all three points. December 30, 2017

Sam Winnall was the man of the moment for Derby at Ipswich, as the attacker scored twice in the 2-1 win.

The forward got Derby off to a good start, scoring an emphatic header from a Tom Lawrence corner in the 13th minute.

He doubled his tally just after the break with a simply stunning strike, finding the net in style from distance.

Joe Garner pulled one back just after the hour mark, but it was not enough to force a comeback and Derby held on for all three points, lifting them above Bristol City and into second to end December unbeaten.

What. A. Win!!!Winnall's double sees the Rams claim all three points and head into  on a winning note! December 30, 2017

Tony Pulis' Middlesbrough reign began with a loss, as they were defeated 1-0 at home by Aston Villa.

Pulis was present for Boro's 2-0 win over Bolton on Boxing Day and even spoke to the players at half-time, but the visit of Villa was technically his first game in charge.

And it was not one he will look back on particularly fondly, as Villa snatched all three points 15 minutes from time – Robert Snodgrass heading in an Albert Adomah cross.

That victory moves Villa level on points with Sheffield United in sixth, after they lost 1-0 at home to Bolton Wanderers.

Steve Bruce: Let's stick together and build on this result. There's plenty of time left yet... December 30, 2017