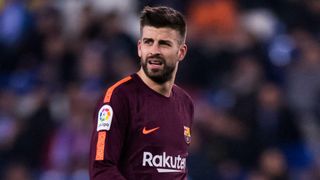 Gerard Pique continued his personal feud with Espanyol after scoring a late equaliser to earn a 1-1 draw against Barcelona's local rivals in LaLiga.

The hosts had led through Gerard Moreno's 66th-minute goal in the derby clash at RCDE Stadium, where Pique was booed relentlessly before gaining revenge by netting in the 82nd minute to earn a share of the spoils.

Pique had angered Espanyol's fans, and prompted the club to report him to the Spanish Football Federation, by making unflattering remarks about the club's suburban location in Cornella following a 2-0 victory at Camp Nou in the second leg of their Copa del Rey quarter-final last month.

The 31-year-old previously claimed he and his wife, Colombian pop star Shakira, had been insulted by Espanyol's followers during the first leg of that tie.

And the Spain international was in no mood to soothe tensions after salvaging a point for his team on Sunday.

"The least I could do was bring silence to the Espanyol fans," he was quoted as saying by Marca.

"To say that the club is from Cornella is not disrespectful, it's simply the truth, Espanyol are increasingly uprooted from Barcelona and has a Chinese president.

"They complain about me but don't investigate the insults to my family; players are also people and react accordingly to what happens."

Lucas Digne was substituted in the 75th minute of the draw, and Barca later confirmed he may be set for a spell on the sidelines after fracturing a finger in his right hand.

[INJURY NEWS] has a fractured finger in his right hand. His recovery will determine his availability February 4, 2018