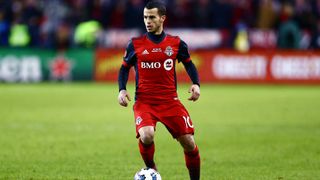 Toronto took a huge step towards the CONCACAF Champions League quarter-finals, while Tigres UANL were pegged back away from home on Tuesday.

Sebastian Giovinco scored and provided an assist as Toronto claimed a 2-0 win over the Rapids in Colorado in their first leg.

The Italian star set up Jonathan Osorio for a header in the second half before volleying in an Auro cross to seal the win for the MLS Cup champions.

It leaves Toronto with a huge advantage heading into their home second leg next week.

Twice as nice Giovinco slams home the half volley, picks up his first assist for TFC | February 21, 2018

Tigres UANL appeared set to be in similar control before they gave up their lead late in a 2-2 draw at Herediano.

Francisco Meza scrambled in an opener for Tigres – Champions League runners-up the past two years – in the 14th minute.

The Mexican giants were in complete control when Lucas Zelarayan tapped in a Jurgen Damm cross just before the hour-mark.

However, Herediano rallied to remain alive in the tie.

Yendrick Ruiz put away a 90th-minute penalty before the Costa Ricans earned a dramatic draw thanks to Jairo Arrieta's header in additional time.

Jairo ARRIETA of scored the Goal of the Game against | February 21, 2018