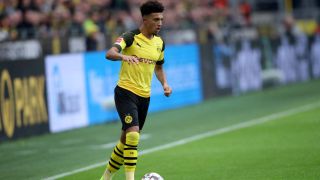 Jadon Sancho has wowed his England team-mates in training, with Fabian Delph labelling the teenager a "special player".

Sancho, 18, made his international debut last month and is again part of the England squad after an impressive start to the season with Borussia Dortmund.

Delph, named captain for a friendly against the United States on Thursday, said he had been taken aback by Sancho in training.

"I really believe the sky is the limit for him. I only managed to spend one week with him at [Manchester] City before he left, and I was very impressed with him then," he told a news conference.

"But seeing him this week, he's been very confident, very calm, very composed.

"You see certain things in certain players that stand out, he's done that for me this week. I've sat back and thought, 'Wow, we've got a special player here'."

England face USA in what is a farewell game for Wayne Rooney, before taking on Croatia in the Nations League on Sunday.

Great to catch up with the lads and meet some of the new squad members  November 14, 2018

Delph said the presence of England's all-time leading goalscorer had been a boost to the squad.

"He [Sancho] must be astonished to be standing on the same pitch as Wayne Rooney," he said.

"A lot of those young lads would've been watching him as a young kid, watching him score all those amazing goals, break all the records he has broken. For them to be sharing a pitch with him, it gives you that extra boost.

"You get to see someone that has been there and done it. It gives you the motivation to try follow in his footsteps."