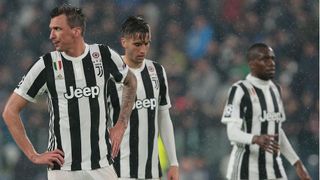 Juventus must believe anything is possible in their bid to produce a Champions League great escape against Real Madrid, says Andrea Pirlo.

Madrid put one foot in the semi-finals with a devastating first-leg showing in Turin, Cristiano Ronaldo scoring twice – including a wonderful overhead kick – and Marcelo adding the third.

Paulo Dybala's red card also leaves Juve shorn of one of their most potent attacking weapons for the return match at the Santiago Bernabeu on Wednesday.

But former Juve star Pirlo, who was on the end of one of the most remarkable Champions League comebacks in 2005 when AC Milan squandered a 3-0 half-time lead to Liverpool in the final and eventually lost on penalties, insists Massimiliano Allegri's men must dare to dream.

"Everything's possible in football. It will be a difficult game but they have to try," he said.

"It's important to have the right mindset and be able to go there and try to overturn the previous outcome. It's hard, of course, but they have to try.

"There are a lot of thoughts going on, you always hope you can play a good game and overturn the previous outcome. Dreams are always good the day before, you can just hope they become a reality later."

Asked if it is a daunting prospect to play at the Bernabeu, Pirlo added: "No, it's not scary. They have to be proud to be able to play in such an important stadium.

"When you play these kinds of games you don't have to be scared, you only have to be able to enjoy playing football."

The legendary Pirlo called time on his playing career towards the end of 2017, last playing for New York City FC in MLS.

Pirlo has been tipped to take a role in Italy's coaching staff if his former Milan boss Carlo Ancelotti or Antonio Conte – who he worked under at Juve – are chosen as the successor to Gian Piero Ventura.

But the 37-year-old insists no such discussions have been held.

"Yes, I talk with Ancelotti. But we haven't spoken about Italy," Pirlo added.

"I don't know yet about my future. I only think about relaxing now after many years of football. You never know, if something good comes in the future. I will try to choose the best thing for me."