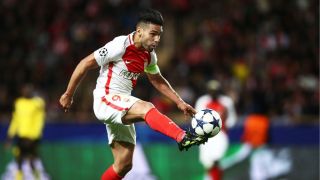 Radamel Falcao is prepared for five finals as Monaco aim to secure their first Ligue 1 title in 17 years.

A hard-fought 2-1 victory at Lyon on Sunday – when Falcao was on target – kept Leonardo Jardim's side top of the table on goal difference from Paris Saint-Germain, champions in each of the past four seasons.

The principality club also hold a game in hand over PSG, while the men from the capital will come into sharp focus as Monaco travel to the Parc des Princes for Wednesday's Coupe de France semi-finals.

Monaco are also in the last four of the Champions League, where Juventus await, but Falcao only has focus for domestic matters, with the league title taking precedence at Stade Louis II.

"We still have five more games to play," he said. "We need to keep doing what we do well. Every weekend we play a final.

"We've fought a lot during the 10 months of the season. All the players have shown that they have a lot of ambition.

"We gave 100 per cent in every game. I think that hard work gives the ability to get what you want.

"Today Monaco is very strong, because of the hard work of the players on the pitch, the people on the bench and the fans in the stadium. We need to keep going ahead."