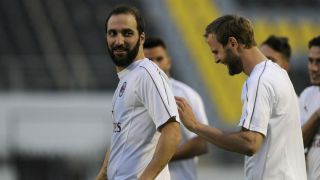 Gennaro Gattuso insists Gonzalo Higuain started AC Milan's Supercoppa Italiana defeat to Juventus on the bench due to a fever, as speculation on the striker's future continues to mount.

Higuain has been tipped to link up with his former Napoli boss Maurizio Sarri at Chelsea during the transfer window.

Those rumours were exacerbated when he did not partake in a team photo with Saudi prince Abdulaziz bin Turki Al-Faisal ahead of the Supercoppa contest in Jeddah, which Juve won 1-0 thanks to Cristiano Ronaldo's header.

Argentina striker Higuain came off the bench with just under 20 minutes remaining and Milan head coach Gattuso is adamant that illness, and not a potential departure, was behind his thinking.

"He's unlucky at the moment. He had a fever last night," Gattuso told Rai Sport.

"We did everything to get him better, but he didn't play much, so I preferred a fresher player.

"It might seem like a joke, but honestly, it's true. Higuain wasn't in the picture when the Saudi Prince came to visit because I was afraid the virus would spread among the other players, so that was my decision."

Pressed on the issue, Gattuso added: "I've got a burning inside me, we have 25 players, so let's not talk about this now.

"We lick our wounds and will see what happens tomorrow."

On the match itself, which saw Milan finish with 10 men following a red card for Franck Kessie, Gattuso felt his team battled well.

"The team showed character and fought hard against a great opponent," he said.

"The performance remains, but there are always regrets when losing a final."