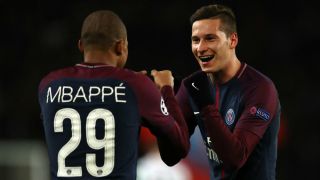 The Germany international joined PSG for a reported €42million from Wolfsburg in January and, although he made 17 Ligue 1 appearances before the end of the 2016-17 season, he struggled to show why the club made such a significant outlay for him.

PSG added further reinforcements in the shape of Neymar and Kylian Mbappe in the close-season, two players expected to compete with Draxler for a place in the team.

The 24-year-old's future subsequently became the subject of speculation, but he feels it is important for the Ligue 1 giants to sign players of such calibre and he has since adapted to a more central role.

"I think it's very important that Paris can buy this type of great player, like Neymar and Kylian Mbappe," Draxler told This is Paris on beIN SPORTS.

"It's a great feeling to play alongside these players. On the one hand it was great that we could get them, but, from my point of view, it was mixed because each player has their own personal objectives and you always want to play every match.

"Both Neymar and Kylian play in my position on the wings, so you think about every option.

"But I have confidence in my abilities and I have the quality to play here and I never considered leaving Paris Saint-Germain after just six months.

"I am very happy to have found a new position on the pitch and it's really amazing to play with them.

Congrats to Julian Draxler on being named the 's best player July 2, 2017

"Now I play in midfield and I like this position a lot, I hope I can keep improving. I have already played in this position with the German national team at the Confederations Cup last summer, and I don't think it's really that hard at Paris.

"There are so many intelligent players, of the highest level. It's a bit different for me, but it's good."