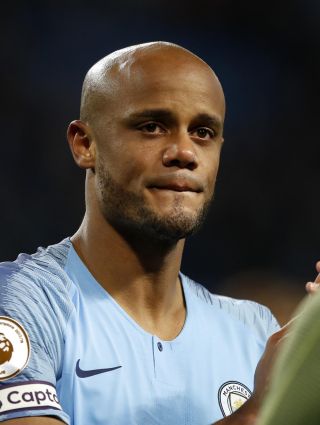 Vincent Kompany admitted his Manchester City future is uncertain after his stunning match-winner against Leicester on Monday night but the 33-year-old is adamant he is not ready to retire.

Kompany ensured City remain on course to retain the Premier League title – win at Brighton next Sunday and it is theirs – with a brilliant 30-yard strike to see off the Foxes 1-0.

But the club captain, whose contract is up in the summer, then shed a few tears as he set out on the end-of-season lap of honour ahead of his team-mates.

“I do not know at this point,” Kompany told Sky Sports when asked about his future.

But asked if he will retire, the Belgian said: “Absolutely not. I am going to play.”

Kompany has been plagued by injuries in recent seasons, reduced to a bit-part role at City with Pep Guardiola unable to rely on him to remain fit.

One more game to go…#PLpic.twitter.com/lOtZaxF8eo— Premier League (@premierleague) May 6, 2019

But Guardiola’s regard for Kompany’s experience has been clear in recent weeks, with the veteran selected for each of the last three league games – against Manchester United, Burnley and Leicester – with their title hopes on the line.

“This club has over a century of history and not a lot in the trophy cabinet but there are players who help us to be who we are today – Joe Hart, Pablo Zabaleta, Vincent Kompany…” Guardiola said.

“When he is fit he is an incredible centre-back. Not just for the goal. He is our leader many times.”

But Guardiola was equally non-committal on the future.

Kompany saves his goals for big moments. There was the one against Manchester United in 2012 which turned the title race City’s way, while his last three have come in last year’s Carabao Cup final, the Manchester derby and now this critical must-win game against Leicester.

But what caught the eye was the manner of it, with few backing Kompany to score from range.

“Everyone was saying don’t shoot but I’ve not come this far in my career to be told when I can and can’t shoot,” Kompany said.

“I’ve had 15 years of top-level midfielders telling me not to shoot but I always told them one day I am going to have a shot from outside the box and I’m going to score a goal.”

If it does prove to be Kompany’s final home game, it was certainly some way to sign off. City will hope it proves a pivotal moment in the title race.

They will head to Brighton for the final game one point clear of Liverpool, who host Wolves, after the remarkable battle in which the two clubs have pushed each other all the way.

City, of course, still have hopes of a domestic treble with the FA Cup final against Watford to come.