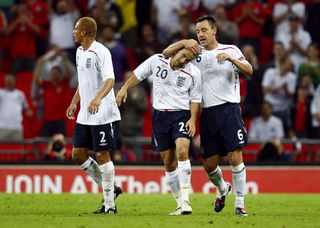 England host the Czech Republic on Friday night as Gareth Southgate’s side look to start their Euro 2020 qualifying campaign with a win.

The Three Lions are unbeaten against their next opponents, albeit having only faced them on two previous occasions.

Here, Press Association Sport looks at those two fixtures as the nations prepare to meet at Wembley for the third time.

In the first meeting of the countries since the dissolution of Czechoslovakia in 1993, Glenn Hoddle’s England would prevail.

So impressive at Wembley two years earlier in reaching the final of Euro ’96, the Czech Republic were well beaten by the Three Lions.

Darren Anderton opened the scoring as Ian Wright – making what would prove to be his final appearance for England – crossed low into the box for the Tottenham winger to steer the ball in the corner of the net.

Wright would also play a big role in the second goal, his cross flicked on by Dion Dublin as Paul Merson – also making his last international appearance – arrived to thrash home a half-volley at the back post.

Former Liverpool and Aston Villa striker Milan Baros gave the visitors the lead as his shot deflected in off Ashley Cole.

England levelled on the stroke of half-time as Wes Brown headed in his only senior international goal from a David Beckham corner.

Petr Rada’s side would re-establish their advantage when Marek Jankulovski beat David James with a fine free-kick soon after the interval.