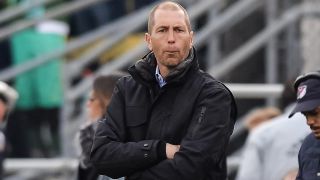 An 84th-minute goal from debutant Niko Hansen saw Crew past the Timbers 3-2, ending Portland's perfect start to the season and sending Columbus top of the Eastern Conference.

Dairon Asprilla's brilliant finish had put Portland ahead in the fourth minute away from home in Ohio on Saturday.

But the hosts struck twice in quick succession, Justin Meram scrambling in from a corner before Ola Kamara looped a finish over Timbers goalkeeper Jake Gleeson, who had come to collect a Federico Higuain pass.

Just as the Timbers appeared set to go into the break behind, Fanendo Adi's strike made it 2-2 in first-half additional time.

However, substitute Hansen had the last say, coming off the bench to score the match-winner for Gregg Berhalter's side.

He'll never forget that one.Niko Hansen puts ahead on his MLS debut! March 26, 2017

Portland remain top of the Western Conference despite their loss, while Columbus lead the East.

Juan Agudelo scored a brace for the Revolution, while Kei Kamara also struck to go with penalties from Lee Nguyen and Chris Tierney.

The win saw New England pick up their first points of the season, with Minnesota bottom of the Western Conference.

The day's other game saw the New York Red Bulls and Real Salt Lake play out a 0-0 draw.