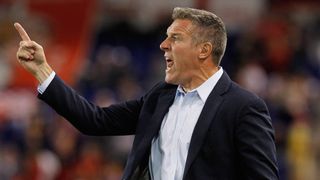 A Felipe Gutierrez goal was enough to see Sporting to a 1-0 victory over Orlando City in Kansas.

Gutierrez produced a fine low finish from 20 yards in the 53rd minute for the only goal of the game.

The result moved Peter Vermes' Sporting up into second and to within a point of conference leaders Dallas.

What a way to make your comeback, Felipe Gutiérrez! September 9, 2018

The Timbers are on track to feature in the play-offs after a 2-0 win over the Colorado Rapids.

Jeremy Ebobisse and Diego Valeri scored either side of half-time to move the Timbers four points clear of the seventh-placed Vancouver Whitecaps in the Western Conference.