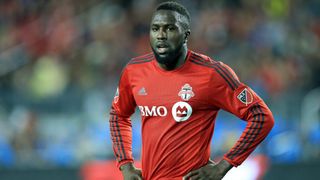 Toronto leapfrogged New York City to move atop of the Eastern Conference in MLS after contrasting results Saturday.

Jozy Altidore inspired Toronto to a win over the Chicago Fire, sending them top by two points.

Frank Lampard continued his fine form with another goal for New York City, but they suffered a surprise loss to the New England Revolution.

Fresh from netting three times in two games for the United States, Altidore opened the scoring in Toronto's 2-1 win.

Found by Justin Morrow, Altidore picked out the bottom corner in the 33rd minute before setting up Jonathan Osorio for his side's second following a dreadful throw by Fire goalkeeper Sean Johnson.

Michael de Leeuw headed in for the hosts in the 58th minute, but Toronto held on for their win.

The Revolution continued their play-off push with a 3-1 victory over New York City.

Lampard scored for the third time in two games, but goals from Juan Agudelo, Lee Nguyen and Diego Fagundez saw New England to their win.

They sit just a point behind the sixth-placed Orlando City in the East.

Matteo Mancosu scored a late equaliser as the Montreal Impact earned a 1-1 draw at the Philadelphia Union, while the Vancouver Whitecaps came from behind to beat the Columbus Crew 3-1.

The Portland Timbers edged Real Salt Lake 1-0 and the San Jose Earthquakes and Seattle Sounders played out a 1-1 draw.