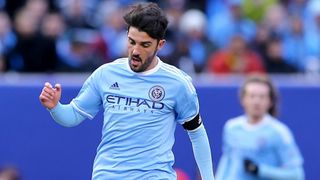 While Steven Gerrard and Frank Lampard going toe-to-toe once more received the bulk of the attention, it was David Villa's sixth-minute goal that separated the two sides in New York.

Undefeated in four games, City are a point ahead of Toronto FC, who defeated Philadelphia Union 3-1 to extend their own unbeaten run to six.

Reigning MVP Sebastian Giovinco found himself level with Villa in the goalscoring charts, with his 18th-minute opener.

Jozy Altidore and Drew Moor scored for the Canadian side, while Ken Tribbett provided some consolation for the fourth-placed Union, now seven points from top in the east.

Also in the east, bottom-placed Chicago Fire pulled off their first away win in two years after they accounted for Montreal Impact 3-0, while Columbus Crew defeated New England Revolution 2-0.

Meanwhile, Orlando City were unable to cement their place in the post-season spots, only attaining a 0-0 against Colorado Rapids.