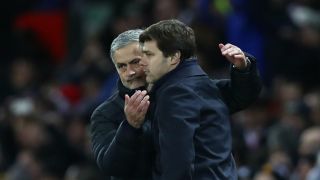 Tottenham manager Mauricio Pochettino insists there is no rift between himself and Manchester United boss Jose Mourinho ahead of their weekend showdown.

United and Spurs are level on 20 points in the Premier League and sit as the closest challengers to leaders Manchester City on the eve of a keenly anticipated Old Trafford clash.

An extract from Pochettino's new book, published this week, detailed how the Argentinian was unimpressed by Mourinho hugging and talking with Eric Dier after last season's match at Old Trafford that United won 1-0.

Dier had been linked with a possible move to United and confirmed interest from the 20-time English champions in a lengthy discussion with Pochettino after the incident.

Pochettino accused Mourinho of putting Dier "in a compromising position" but, speaking at a news conference ahead of Saturday's game, he insisted the affair had long since been put to bed.

"That is a thing that is in the past," said the Spurs boss, who will be without top scorer Harry Kane against United due to a hamstring injury.

"I was honest. My relationship with him is very good, we are in contact. That was only one situation, a small one. It is not an issue.

"I don't like to speak about my book because it is in the past. The book only tried to show how difficult it is for every manager. Not only me. The intention is a book that can help a lot of people understand how our life is.

"You can read in my book how he is, for me, one of the best managers in the world – admired like [Pep] Guardiola. I am not perfect, I am human too."

Pochettino went on to confirm he stays in regular text contact with Mourinho and got in touch to offer condolences when the Portuguese's father passed away during the close season.

The Spurs manager was keen to move attention away from the book and towards the weekend match, where he feels there should no longer be onus on his side to prove they belong alongside the heavyweights of English football.

"Every time over the last months when we are going to compete and play, [people say] that game will be... against Liverpool, Real Madrid and now in Manchester," he added.

"Always it is like we need to show the people that we deserve to be there. It is not like this.

"We are a team who want to compete, who are competing and then the results are the results.

"We have a clear idea about how we want to move and go – that is to win games and try to be on top in every competition."