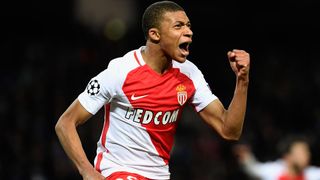 Kylian Mbappe's pending arrival will give Paris Saint-Germain an attack that is the envy of world football according to Adrien Rabiot.

PSG have reportedly struck a deal with Monaco to sign the 18-year-old striker on an initial loan with an obligation to buy for €180million at the end of this season.

Rabiot is among the PSG contingent currently training with Mbappe with the France national team at Clairefontaine and he told Le Parisien that the youngster expects his blockbusting switch to be confirmed in a matter of hours rather than days.

"He explained that his arrival at PSG should be formalised on Tuesday," the midfielder said. "This is very good news for the club of course.

"Kylian is a young player who is already mature, at ease in a collective, endowed with a huge potential and from the Paris region. This latter criterion is not insignificant for PSG."

Uruguay striker Edinson Cavani scored 49 goals in all competitions last season and has five in four Ligue 1 appearances this time around, yet his position in the starting XI might not now be guaranteed.

"There will certainly be a traffic jam ahead, but this is a matter for the club and the coach," Rabiot said. "What is certain is that we will have a very large number of options with Neymar, Cavani, Mbappe and the other attackers present.

"Neymar and Mbappe, in particular, can play the three positions of the attack.

"It could already have been the case before Kylian's arrival but now, of course, PSG will have one of the best attacks in the world.

"The most exciting thing is the youth of the recruits. Neymar can stay on top for another seven or eight years and Kylian for over 10 years. "

Similar attention has not been paid to positions further back in the PSG line-up, although Rabiot praised the club for keeping hold of fellow midfielder Marco Verratti and defender Marquinhos during the close season.

"It is important in my opinion to recruit a player capable of succeeding Thiago Motta," he said, referring to the veteran holding player.

"For this season because Thiago, who turned 35 [on Monday], will not be able to play sixty games this year. And also for subsequent seasons.

"Unai Emery made me play a good part of the past season in this position and that's really not where I express myself best."