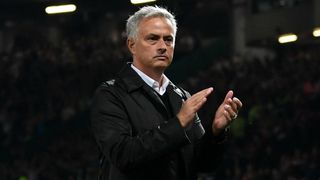 United boss Mourinho suffered the heaviest home loss of his managerial career on Monday when Tottenham won 3-0 at Old Trafford.

That result came eight days after United had been beaten 3-2 by Brighton and Hove Albion and they are already six points adrift of Liverpool, Chelsea and Spurs in the Premier League table.

Mourinho was defiant after the Spurs defeat, highlighting how he had won more Premier League titles than his 19 counterparts in the division combined, and Robson insists United cannot listen to those supporters who are calling for a managerial change.

"It's too easy," the two-time Premier League winner told MUTV.

"The minority of fans in clubs will be asking for the manager's head after a few bad results and it's often they speak the loudest.

"The track record that Jose has holds up. After three games, you don't talk about sacking the manager, you encourage and back him."

United unravelled in the second half against Spurs as their central-defensive issues were once again exposed.

Mourinho had dispensed with the pairing of Eric Bailly and Victor Lindelof following their struggles against Brighton, but his decision to select midfielder Ander Herrera in an unorthodox back three backfired.

The United boss later conceded he was unsure what his best defence should look like and Robson is keen for Mourinho to select a settled unit.

"What I'd like to see is Jose picking two centre halves he trusts and see them for a run of games," Robson added.

"We need two defenders who know each other properly. Like Rio [Ferdinand] and [Nemanja] Vidic and others but the centre halves have also always been in the team. It would be nice to see that for a run of games and get clean sheets."