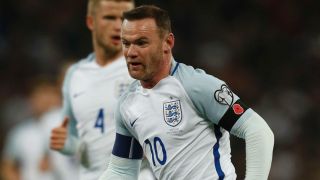 Gareth Southgate will retain Wayne Rooney as England captain, but emphasised the importance of several players emerging as leaders for the national team.

Rooney kept the armband during Southgate's four-match interim tenure and is set to continue in the role now the 46-year-old has been given the job permanently on a deal until 2020.

The Manchester United striker faced scrutiny after being pictured in The Sun allegedly drinking at a wedding in the team hotel in the wake of England's World Cup qualifying win over Scotland last month, although Rooney later stated he did "not even set foot into the wedding".

Southgate, who started Rooney in just two of the four matches he has overseen, says England's record goalscorer will remain captain even though he is not guaranteed a starting berth, but challenged others in the squad to lead by example as well.

"Wayne Rooney is the England captain, I said that at the start of my interim period," Southgate told a news conference.

"I've selected him to start in just two of the four games, so it's not a case that Wayne expects to play every game.

"It's important to develop more leaders. When I played, particularly in 1996, there were captains through the team that were captains of their club.

"If we're going to develop then resilience is a key area. We have to give people chance to lead in different ways. Wayne has played an important part and can do so in the future, but we have to develop others."

Following the furore that surrounded Rooney's post-Scotland antics, Southgate was asked if he will "lay down the law" now he is permanent manager.

But Southgate insists that there has to be an element of trust with his players, adding: "Being an England player comes with additional responsibility to club football.

"[But] laying down the law is not necessary with this group, I like to treat them with respect as adults.

"There has to be trust and clear guidelines, but players have to take leadership in that."