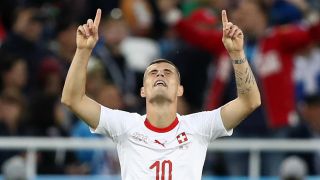 Discussions of a team's World Cup prospects can often feel like a generation game, with cycles mentioned more times than during your average Tour de France.

Over the weekend, Croatia's golden generation of Luka Modric, Ivan Rakitic and the rest just about stayed on track, while the Argentinian vintage dating back to their 2005 Under-20 World Cup triumph and inspired by Lionel Messi ran out of road, much like the last vestiges of Spain's tiki-taka heroes.

Time is measured in four-year chunks as international obituaries are hastily written and, in Tuesday's last-16 game in St Petersburg, there will be a golden generation from a nation synonymous with the commodity seeking to avoid a similar fate.

In three of their past four World Cups, Switzerland have reached the knockout stages without going any further.

A settled squad features star men such as Xherdan Shaqiri, Granit Xhaka and Ricardo Rodriguez in their mid-20s and a tough but eminently winnable tie with Sweden – Vladimir Petkovic's men would reasonably have expected to be facing Germany at this stage – represents an enticing opportunity in an increasingly wide-open competition.

"Comparisons over time are impossible to make - football has evolved a lot - but one could argue that today's generation is the finest Switzerland has ever had," former Swiss midfielder Ciriaco Sforza told Omnisport.

"If you look at the squad, all but one or two of the lads play in top European leagues. As a comparison, in my time there were barely four who played abroad."

Ex-Kaiserslautern, Inter and Bayern Munich playmaker Sforza was part of the squad Roy Hodgson led to the 1994 World Cup in the United States, and the veteran English coach is credited with putting the foundations in place that have helped the current crop to flourish.

"The team is made of players who went through an improved youth system, which was installed in the mid-nineties with help from Hodgson," Oliver Zesiger, a Swiss football scout and – in a job description to make a certain demographic swoon – the co-head researcher for Football Manager in his homeland, explained to Omnisport.

"The FA took a look at successful youth systems like the Dutch and formed a system that works for Switzerland. Another part is that the Swiss team profited from immigration, especially from the Balkan states."

The latter element in Switzerland's make-up gained global attention after a fired-up Xhaka and Shaqiri scored superb second-half goals in the 2-1 group-stage win over Serbia.

Both players are of Kosovar-Albanian heritage, with Shaqiri born in Kosovo before his family fled during the late 1990s conflict between the Federal Republic of Yugoslavia – Montenegro and Serbia at that time – and the Kosovo Liberation Army.

They celebrated in Kaliningrad with a hand gesture to signify the two-headed eagle depicted on the Albanian flag, an act of emotionally-charged and proud defiance that brought FIFA fines but no bans.

Although both Sforza and Zesiger would have preferred Shaqiri and Xhaka kept their powder dry, they acknowledge a broad understanding towards their actions from an increasingly diverse population back home.

"Switzerland is precisely all about that," Sforza said. "A fourth of our population is made up by foreigners, it’s part of our national DNA.

"Our 'secondos' – the term we use for the second generation born to immigrants in Switzerland - make up for a good part of our best players in the national team."

The jewel among them is former Bayern winger Shaqiri, who endured relegation from the Premier League with Stoke City this season but showed what a decisive performer he can be when at his blistering best in the Serbia game.

"His lack of consistency is frustrating, but he's hugely important to the team as he's one of the few players who can make the difference in a game by themselves," Zesiger said.

"And, usually, he comes through in big games, as seen versus Serbia or with his hat-trick against Honduras at the last World Cup."

There are few bigger than a match presenting a path to Switzerland's first World Cup quarter-final since they reached the last eight on home soil in 1954.

"We’re witnessing a World Cup that could perfectly present us with two finalists nobody could have dreamt of before," said Sforza, who notes Sweden's progress through qualification at the expense of Netherlands and Italy as a clear demonstration of their under-estimated quality.

"The Swiss shouldn't get ahead of themselves and take it a step at a time."

Zesiger harbours concerns over Sweden's set-piece threat, although the excellent form of goalkeeper Yann Sommer and centre-back Manuel Akanji in Russia so far can be a source of comfort.

"This team is a good mixture of youth and experience, so it's the perfect time to do something special and advance to the final eight," he added. "Who knows what the team will look like in four years, should Switzerland qualify."

As is the case with all golden generations at World Cups, the clock is ticking. Maybe Shaqiri, Xhaka and the rest can make this an occasion of immaculate Swiss timing.