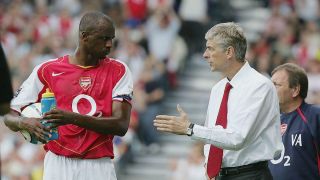 New York City FC coach Patrick Vieira is disappointed he was not given the opportunity to start his coaching career with former club Arsenal.

The World Cup winner spent nine years with Arsenal before returning to Italy where he played for Juventus and Inter, having previously featured for AC Milan in Serie A.

Vieira then went back to England to end his career with Manchester City, and later became involved with the coaching set-up at the same club as Gunners boss Arsene Wenger made no invitation to his compatriot.

Having now moved on to another City Football Group project in New York City  - Vieira admitted he would have liked more assistance from Wenger.

He told RMC: "It's true that after spending nine years at Arsenal, it's the club of my heart - the one where I played my best football - I would have liked if the door was more open to me or other players who spent time there and who would have wanted to learn their career as a coach.

"Unfortunately, that's not the case. I was lucky to arrive at Manchester City at the right moment, but it's true that it leaves a little disappointment with regards to Arsenal.

"I don't think that [myself, Thierry Henry or others] have the ambition to claim the spotlight at Arsenal, because it's not possible. Things must be done naturally.

"I don't know the demands of everyone, but in my case I just expected a call to ask me if I would go and learn my craft at Arsenal - without taking the place of the U21 or U19 coach, because they are good at their job.

"I've never spoken [with Wenger]. At the same time, he does want he wants."

Vieira guided New York City to the MLS playoffs for the first time in 2016, having finished second in the Eastern Conference.