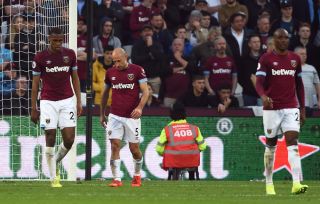 The Hammers, previously unbeaten at home since the turn of the year, would have climbed into the potential Europa League spot with victory over Everton at the London Stadium on Saturday.

Instead first-half goals from Kurt Zouma and Bernard condemned them to a deflating 2-0 defeat.

Even a top-half finish looks a tall order now, with three of West Ham’s next four matches away at Chelsea, Manchester United and Tottenham.

But Cresswell, stand-in skipper in the absence of Mark Noble, is determined not to let the season fizzle out.

“We’re aiming for seventh place,” he told the club’s website. “The top six is done now and that seventh spot is where we want to be.

“But there’s four other teams who want that and it’s going to be tough.

“There are six games to go, with some tough games in there, and we want points from them.”

Zouma headed the Toffees ahead from a corner in the fifth minute and Brazilian winger Bernard tapped in his first Premier League goal thanks to more poor defending just after the half-hour mark.

“It was a bad day at the office,” added Cresswell. “Everton fully deserved the win.

“We weren’t good enough throughout the whole game, particularly in the first half. They went 2-0 up and that was too hard to come back from.

“It was one of those days, and we need to put it behind us now.”

Just two points separate West Ham in 11th and seventh-placed Wolves, while Everton climbed to ninth with their second win in succession.

Everton skipper Seamus Coleman told the club’s website: “We want to finish strongly and keep aiming for that seventh place.

“To get 2-0 up at half-time, it was important we held on to it. We did that and now we want to keep building.

“We wanted to be focused and that’s what we did, and we kept the ball well. I think everyone put in a shift and now we need to keep going like this.”