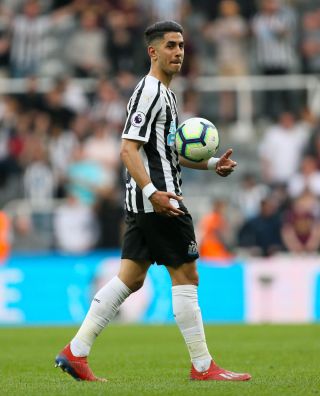 As the Fantasy Premier League season comes to a close, jumping on an in-form striker for the run-in could make the difference in your FPL mini-league.

Armchair managers everywhere will be crunching the numbers on recent form and the remaining fixtures – or simply riding wild hunches in a bid to get the better of friends and family.

Our data can help you identify the men who matter at both ends of the field – with Everton in solid defensive form while a pair of strikers from outside the traditional elite are proving their worth.

Press Association Sport allocates each player a “Transfer Score” each week, with their FPL form rating accounting for half of the total while lower price, ownership and fixture difficulty will also boost their rating.

Perez’s hat-trick against Southampton and goal against Leicester have vaulted him into the reckoning while Wood scored twice against Cardiff and once against Bournemouth and also has assists in three of Burnley’s last four games.

The pair’s respective transfer scores of 84 and 83 leave them comfortably clear of Leicester’s Jamie Vardy, third in our forward ratings at 71.

The Kiwi is the more consistent but note that Burnley still have both Manchester City and Arsenal to play as well as unpredictable Everton. The Magpies travel to Brighton and Fulham either side of hosting Liverpool.

Sink your teeth into Toffees’ defence

At the other end of the field, Everton have emerged as the team in form.

Making a mockery of the fixture difficulty projections, the Toffees have kept clean sheets against Manchester United, Arsenal and West Ham in their last four games while losing 2-0 to relegated Fulham.

Centre-back Kurt Zouma tops our transfer score rankings on 85 after also scoring against the Hammers, with Seamus Coleman second after an assist in the same game and a bonus point against United.

Team-mate Jordan Pickford ranks second among goalkeepers, kept off the top spot by the emergence of the cut-price Vicente Guaita at Crystal Palace.

Manchester City have the third-ranked player in each position, keeper Ederson and centre-back Aymeric Laporte.

Fulham’s season has been a tale of woe but recent back-to-back wins over Watford and the Toffees have allowed them to finish with some cause for optimism.

Ryan Babel scored in both games, as well as the loss to his former club Liverpool, and is our top-ranked midfielder for week 36 – indeed, he matches Zouma for the best transfer score in the league.

Home games against Cardiff and Newcastle look like opportunities for the Dutchman to add to his 63 points in only 13 weeks in the league, while Fulham travel to Wolves in their other remaining fixture. Striker Aleksandar Mitrovic also warrants consideration after creeping back into form with a goal and an assist in the last two games.

FPL perennial Luka Milivojevic is just behind Babel with a transfer score of 83, boosted as ever by penalties as well as his recent free-kick goal against City, while Tottenham’s Lucas Moura is still riding the high of his hat-trick against Huddersfield.