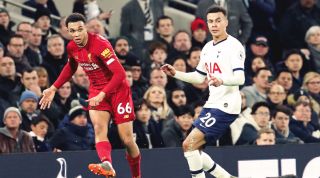 Football is awash with money and it always has been - despite what your dad says. Jimmy Greaves cost five figures over 50 years ago, for goodness' sake. You could’ve bought a house for £30 back then.

But while players have always gone for a lot of money, some of them have not always been worth it. That made us think - what are the most valuable match-ups between two teams ever? We’re talking about the two teams with the most amount of monetary value on the field at one time.

So despite the extortionate fees they’ve paid, that leaves Manchester United and Paris Saint-Germain watching from the sidelines for this one.

We used Tranfermarkt.com calculations for the values, so send any abuse their way if you're unhappy with the list. Or don't.

The most recent clash between Pep Guardiola and Jurgen Klopp wasn't quite the close-fought epic that some games have been between the pair.

Manchester City took advantage of a supposed Liverpool title party hangover, blowing the new champions away with a clinical and unforgiving performance. Plenty of talent on both sides in this one - the Reds put out their strongest line-up, despite the scoreline - but the combined value of both didn't reach any higher than this, simply because values have dropped post-coronavirus.

It’s not a game that will live in the memory, let’s face it – this was just a victory during Liverpool’s insatiable unbeaten run.

Liverpool’s squad at this point was worth a whopping £832m. Their players’ market shares were on the up, while Tottenham Hotspur fielded the likes of Dele Alli, Son Heung-min and Harry Winks - all worth a fair bob themselves.

El Clasico presents the biggest and the best in world football. The most expensive players in the world have moved to Real Madrid and Barcelona over the years, so it’s perhaps no surprise that this fixture presents itself twice in this list.

Barca’s 1-0 victory of their rivals last March showcased a host of valuable talent in each starting XI. Barca - worth £738m at the time - led with the likes of Ousmane Dembele, Messi and Arthur, while Real - worth £544m - started with Gareth Bale, Vinicius Jr and Raphael Varane. Considering that neither side is as good as they used to be, that’s a pretty phenomenal value for each team.

The game that broke Red hearts, it perhaps won’t be any solace to Liverpool fans that were they to sell the entire starting XI from that game, they’d get around £200m more for them than Atletico Madrid could get for theirs.

With Oblak, Saul and Joao Felix, that’s still a pretty valuable away team from Atleti. All in all, £524m in fact - impressive, considering it was assembled for considerably less.

On the subject of how much money the Atletico Madrid side is worth, their clash with superstar-studded Barca a year and a half ago was packed with valuable talent.

This was back when Antoine Griezmann played in the capital - he lined up with Rodri, Thomas Lemar and Lucas Hernandez for a home side that was worth £608m. This was a good run of form for Barcelona though, with Messi, Arthur and Ter Stegen helping to tip Barca’s value to £679m.

This was back when Samuel Umtiti was heading into the World Cup as one of the most valuable defenders on earth, when Coutinho had not long joined the club and when Messi and Suarez were a touch younger. On the opposing side, Real Madrid were full strength: Marcelo at his peak, Cristiano Ronaldo still with Los Blancos and Bale still worth a fair whack.

Another match-up between Tottenham and Liverpool, this was during a tricky run for the Reds that they inevitably made look simple.

Harry Kane, Son and Moussa Sissoko lined up for Spurs, while Liverpool fielded their first-choice front three, along with Fabinho, Van Dijk, Alexander-Arnold, Robertson and Alisson. Not hard to see how Liverpool were valued at £742m and Spurs at £559m.

Combined values of both XIs: £1.3bn

That Atletico Madrid side are worth a lot more money than you thought they were, right?

This was another game in which Griezmann started alongside Diego Costa - who was sent off - while Thomas Partey lined up with Rodri in midfield. Jose Gimenez and Godin played at the back, while Barcelona had the likes of Messi, Arthur, Ter Stegen, Lenglet and Coutinho - was far better thought of back then.

Given what we’ve discovered so far, it’s perhaps no surprise that this match was full of quite such valuable players.

This was before we realised that Liverpool were even in a blip, their unbeaten quest for three trophies still on. They went full strength, while Atletico were their usual formidable selves. When you sat down to watch this game that night, did you realise that this was the second-most valuable match-up between two sides ever? Nope, neither did we.

For the record, Liverpool’s XI that night were worth £864m - the highest of any team on this list. They say that money can’t buy you happiness...

This wasn’t exactly the best game between these two, but it did come at a time at which Manchester City were extremely well valued - £634m, to be precise - and Liverpool were shooting up in price - £742.5m. Again, Liverpool went full strength (there’s a theme, here) with the visitors opting for a front four of Sergio Aguero, Raheem Sterling, Bernardo Silva and Kevin De Bruyne.

The crazy thing? Aymeric Laporte, Ederson, Benjamin Mendy and Leroy Sané were all missing. Think how much more this game could have been worth.