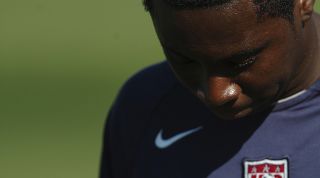 There's something in the South American water. Aguero wasted little time making an impression in senior football, having only just turned 15 when he represented Independiente for the first time. Still 11 months shy of his 16th birthday, the striker broke Maradona's record to become the youngest-ever player in Argentina's top flight.

Aguero had to remain patient for his next senior outing, but he later became the youngest all-time debutant in the Copa Libertadores, a record he held for three years. When he was 17, he scored what many Independiente fans regard to be the club's greatest goal. The Manchester City marksman has a nine-year-old son, Benjamin, who has six years to match the feats of his dad and grandfather (Maradona's daughter is the child's mother).

Hopes are high for Stoica in Romania, but his father - the former Steaua Bucharest and Romania defender Pompiliu - will be keen to ensure that his son's feet remain firmly on the ground.

At the scarely believable age of 14, Stoica Jr. became Steaua's youngest ever player and goalscorer last year, finding the net after coming off the bench in a 6-1 defeat of Sanatatea Cluj. He's made three more first-team appearances since then, as well as appearing three times for Romania's under-16s.

The classic case. Fans of Championship Manager 4 will fondly remember Adu, who invariably went on to become one of the best players in the virtual world. The hype around the "next Pele" was ginormous in real life too; the American became the highest-paid and youngest player in MLS after breaking through at D.C. United when he was just 14.

A trial with Manchester United followed, but Adu was unable to win a contract at Old Trafford and his career soon unravelled. The attacking midfielder, still only 29, spent four years on the books of Benfica but is now back in US football's second tier with the Las Vegas Lights.

Adu was tipped to follow Pele for a reason - the Brazilian had also been a teenage sensation, but unlike the American went on to realise his potential... and then some. Considered by many to be the greatest player of all time, Pele made his Santos bow two months before his 16th birthday, scoring in a 7-1 thrashing of Corinthians.

Two years later he lifted the World Cup with Brazil at 17 - and to this day remains the youngest ever winner of the competition. Pele was named Young Player of the Tournament after scoring six times, including twice in the final against Sweden. He remains the only player to win the World Cup three times.

Maradona, unsurprisingly, was another early bloomer. The future World Cup winner pulled on an Argentinos Juniors shirt for the first time 10 days before his 16th birthday; fewer than four months later, he became the youngster player in Argentine national team history.

English audiences caught a glimpse of the teenage Maradona in 1980, when the forward turned in a dazzling display in a Wembley friendly. Six years later, he would play even better against the same opposition at the 1986 World Cup...

Before a certain Lionel Messi broke the record in 2014, the title of Barcelona's all-time top scorer belonged to Alcantara, who netted a staggering 369 goals in 357 games for the Blaugrana. Born in the Philippines, the forward moved to Spain as a youngster and was still growing into his big boy trousers when he scored a hat-trick on his senior debut in 1912, aged just 15.

Alcantara – who remains Barcelona's youngest ever goalscorer – was also prolific for Spain, netting six times in five official appearances for his adopted nation.

Known as "Golden Boy" by the Italian public (as coined by his former manager Giuseppe Viani), Rivera (left) was a prodigiously talented youngster who caught the eye from an early age. His maiden professional outing came for hometown club Alessandria as a 15-year-old, before the forward joined European giants Milan aged 17 in 1960.

Rivera also hit the ground running at San Siro, making 30 league appearances in his debut campaign as the Rossoneri finished second in Serie A. He spent a total of 19 years at Milan, winning three Serie A titles and two European Cups.

Odegaard is only 19 and still has his whole career ahead of him, but he's yet to live up to the early hype. The Norwegian shot to fame in August 2014 when he made his debut for the national team aged 15, having already played a handful of games for club side Stromsgodset.

Real Madrid came calling at the start of 2015, with Odegaard initially joining their reserve side - then managed by Zinedine Zidane. Almost four years on and he's played just twice for los Blancos' first team, with the attacker currently on loan at Dutch outfit Vitesse after a spell at Heerenveen.

"I hoped that I'd have a place in Real's team," he sighed to Voetbal International recently. "I was training all summer long and got some minutes in the first team. At the end of the summer, the club and I decided that it would be better for me to play elsewhere."

Paraguayan youngster Ovelar hit the headlines recently, but he doesn't come close to being the youngest ever professional footballer. That accolade is held by Baldivieso, who - somehow - made his debut for Aurora in the Bolivian top flight at the age of 12 (according to unverified records, it must be said).

There's more to the story than initially meets the eye, though: the club were managed by Baldivieso's father, Julio Cesar, who soon quit after being told to drop his son. Nepotism doesn't pay, folks.

BIG INTERVIEW Tim Cahill – “When I said I was leaving Everton, Phil Jagielka turned around and half-slapped me”

QUIZ! Can you name the missing sponsors from these 15 Premier League shirts?

Now 22, the midfielder is currently without a club.

Garcia is 31 now, but the striker was just 13 years and 11 months old when he made his debut for Peruvian side Juan Aurich in June 2001. He was therefore the record holder before Baldivieso, and his early start is perhaps even more impressive when you take into account the fact that his dad wasn't the manager.