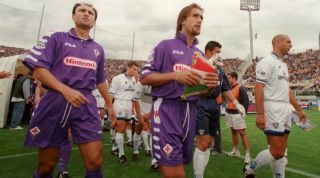 Competing for silverware on multiple fronts can be a precarious business. Succeed and you’ll secure a place among the greats, but fail and that old adage about there being no prizes for second will be mercilessly parped by rivals.

Sometimes, the pressure of so much success can all be a little too much – although Manchester City have at least secured themselves a trinket in 2018/19 with Sunday's League Cup triumph. But many find themselves on the brink of having it all and end up with nothing.

Here are 10 of the greatest nearly-teams ever assembled...

With Giovanni Trapattoni installed as manager, Fiorentina went into 1998/99 determined to end their 30-year wait for a Scudetto. By late February they were top, with Gabriel Batistuta scoring 13 goals in La Viola’s first 13 games.

But when ‘Batigol’ was struck down by injury, the Florence side's lack of depth began to tell. Madcap back-up striker Edmundo went AWOL after exercising a bizarre clause in his contract that allowed him to depart, mid-season, for the Rio Carnival.

A run of just two wins in their next 11 games followed, and Fiorentina ultimately finished third. They reached the Coppa Italia final against Parma too, but despite leading with less than 20 minutes of the two-legged tie remaining, La Viola failed to see the game out. They conceded and lost on away goals. Twenty years on, they're still waiting for that elusive title.

Leverkusen’s “treble horror” is the stuff of legend in Germany. With just three games to go in the Bundesliga, Klaus Toppmoller’s team held a five-point advantage over Borussia Dortmund and had reached the finals of both the DFB-Pokal and Champions League. Yet even the presence of a young Michael Ballack – who bagged a record 17 goals from midfield – could do little to stop the psychological rot that set in for a club with the unfortunate moniker of “Neverkusen”.

After losing defensive stalwart Jens Nowotny to injury, Leverkusen lost two of their remaining three Bundesliga games – including an inexplicable 1-0 loss to relegation-threatened Nurnberg – which handed the title to Dortmund.

It was a similar story in the DFB-Pokal where, despite leading Schalke 1-0 at half-time through Dimitar Berbatov's goal, the Bayer-backed side suffered a monumental second-half collapse to lose 4-2.

The golden touch that had helped Ballack & Co. beat Arsenal, Liverpool and Manchester United on route to the 2002 final also deserted them in Champions League showpiece. Zinedine Zidane's wonder strike on the stroke of half-time proved decisive in a 2-1 win for Real Madrid.

What they couldn’t have countenanced, however, was Dortmund's form under then-manager Jurgen Klopp. Despite entering February top of the table, Bayern soon found themselves struggling to match Klopp's rampant side who were in the midst of a sensational 28-match unbeaten run, and would ultimately finish eight points clear of their illustrious rivals. Bayern’s Dortmund despair continued in the DFB-Pokal when they were trounced 5-2.

Despite finishing a distant second best domestically, a sense of destiny surrounded their Champions League final meeting with an out-of-sorts Chelsea. It was taking place at Munich’s Allianz Arena, after all.

The Bavarians dominated but failed to make their chances count and, even when they did take the lead late on through Thomas Muller, the 'hosts' were immediately pegged back by Didier Drogba. There was still time for Arjen Robben to miss a penalty in extra time, and then for things to get worse as Bayern lost in the resulting shootout.

Fergie’s Fledglings may have come good with their treble-winning charge of 1998/99, but Arsenal came close to clipping their wings. Arsene Wenger’s side had one hand on the Premier League and FA Cup in each instance, only to lose their grasp at the most important moments.

In that famous FA Cup semi-final meeting it was Arsenal, not Manchester United, who dominated. Playing with a man advantage after Roy Keane’s sending off 16 minutes from time, the Gunners missed a glut of chances, including Dennis Bergkamp’s last-minute penalty which was saved easily by Peter Schmeichel. Ryan Giggs saw to the rest.

In the Premier League, meanwhile, Wenger’s side went into their penultimate game against Leeds knowing that two wins in their two remaining games would seal back-to-back titles. Their Yorkshire opponents had other ideas though, and despite carving out countless opportunities, Arsenal went down 1-0. Kaba Diawara had a late effort cleared off the line in a moment that could have changed the course of his short, ill-fated Gunners career.

The Old Lady started the ‘90s determined to end Milan’s domestic dominance and didn’t seem to care how much it would cost them. Roberto Baggio was signed for a world record £8m fee at the start of the decade, and the Bianconeri added German World Cup winners Jurgen Kohler and Stefan Reuter to their ranks a year later, at no small expense.

It seemed to do the trick: Juve were in the Scudetto hunt going into Week 25 of the season, and also faring well in the Coppa Italia. But despite Baggio's 18-goal haul in the lead, Juventus simply couldn’t match Milan’s consistency or goalscoring prowess of Marco van Basten, who netted 22 that year.

Juve won just two of their final nine Serie A games to hand the title to Milan, who remained unbeaten and quite frankly brilliant throughout that season. More misery was to come in the Coppa Italia, where Juve let a 1-0 first-leg lead over Parma slip and lost the return fixture 2-0. They would have to wait until 1995 before they celebrated a domestic title again.

Louis van Gaal’s Barcelona were a far cry from the tiki-taka majesty of Pep Guardiola’s treble-winning side, with the likes of Luis Figo, Patrick Kluivert and Rivaldo struggling to follow up on a season in which they'd won La Liga, 11 points clear of Real Madrid. Rivaldo in particular was given a rough ride by Van Gaal, who demanded that the Brazilian adopt a central playmaker role rather than his preferred position out on the left.

Even then, however, Barça went into the final weeks of the season competing with an inexperienced Deportivo La Coruna for the league, and were in the semi-finals of both the Copa del Rey and Champions League.

Their season soon imploded spectacularly, though, starting in the Copa del Rey – but not thanks to a dodgy performance on the pitch. Barcelona's decision to boycott their semi-final with Valencia over Spanish FA rules concerning player eligibility led to them being kicked out.

A 4-1 drubbing at the hands of Valencia – a game Barcelona perhaps wished they'd boycotted – then set them on their way to a 5-3 loss in the semi-finals of the Champions League.

Barça’s league form collapsed too, with the Catalans claiming two points from a possible nine as Depor were crowned champions. Van Gaal was sacked, and it would be five years before Barcelona won silverware again.

Laurent Blanc had already pulled off a major coup by winning Ligue 1 with Bordeaux in 2009, ending Lyon’s run of seven straight Ligue 1 titles while somehow making mercurial playmaker Yoann Gourcuff and future Arsenal flop Marouane Chamakh into two of Europe’s most in-demand attackers. Yet, for a while, he looked on course to go one better in 2010.

Competing in the Champions League again, Les Girondins went unbeaten in the group stage, finishing above Juventus and Bayern to progress. It was a similar story on the domestic front and, by March, Bordeaux were top of Ligue 1, had reached the Coupe de la Ligue final and had a Champions League quarter-final with Lyon to come.

Yet Gourcuff, Chamakh et al went on to lose their nerve at the worst possible time. They went down 3-1 to Marseille in the League Cup final, lost 3-2 on aggregate to Lyon in Europe and, with their season in freefall, racked up three straight defeats in the league to finish the season sixth – failing to even qualify for the Europa League.

May 2013 was the month in which Benfica saw their treble dreams disintegrate in the most dramatic circumstances. Facing Porto in the penultimate game of the Primeira Liga season, Jorge Jesus’s team were two points clear of their bitter rivals before kick-off.

But despite taking an early lead, Benfica contrived to lose 2-1, with Porto winger Kelvin scoring the decisive goal deep into stoppage time. Porto went on to seal the title with victory over Pacos de Ferreira on the final day.

Benfica fell apart against Vitoria Guimaraes in the Taca de Portugal final, going ahead once again but conceding twice in the final 11 minutes against their unfancied opponents in a 2-1 defeat.

The Europa League final followed a similar pattern, though this time Benfica could attribute the loss to superstition. Back in the 1960s, their angered outgoing coach Bela Guttman cursed the club, telling them that Benfica wouldn’t win another European trophy for 100 years. The club have lost eight finals since then, including in 2013 against Chelsea, when Branislav Ivanovic struck a 93rd-minute winner.

Ajax were the toast of Europe going into the final few weeks of 2016/17 with Peter Bosz’s young, energetic charges thriving under their manager’s possession-led, counter-pressing style. While the goals of Kasper Dolberg had the Amsterdam giants neck and neck with Feyenoord in the Eredivisie, the likes of Davy Klaassen, Jairo Riedewald and Davinson Sanchez had also impressed in the Europa League as Ajax reached the final.

But just when it seemed like everything was coming together for Ajax, Bosz and his youthful squad’s lack of experience told. A surprise 1-0 loss to an out-of-sorts PSV with just two games of the season remaining gave a wobbling Feyenoord the breathing space they needed to seal a first title in 18 years.

Worse was to come in the Europa League, when Ajax failed to turn up in a turgid final that Jose Mourinho's Manchester United comfortably won 2-0. Bosz, Klaassen and Riedewald departed the club that summer, going on to endure disappointing spells with Borussia Dortmund, Everton and Crystal Palace respectively – although there was at least some success for the Tottenham-bound Sanchez.

The Bhoys were dreaming big in 2003 after reaching the UEFA Cup final under Martin O’Neill, in what was Celtic’s first appearance in a European final since 1970. On top of that, a team boasting the hefty attacking threat of Chris Sutton, John Hartson and Henrik Larsson reached the Scottish League Cup final, and was neck and neck with Alex McLeish’s Rangers in the league.

But in a season of fine margins, the Hoops found themselves on the wrong side of history – and Rangers. It started in the League Cup final, where a last-minute penalty miss from the usually-reliable Hartson handed the trophy to McLeish’s team in a 2-1 win.

The UEFA Cup was decided in similarly dramatic fashion, when Jose Mourinho’s Porto overcame Celtic 3-2 after extra time, despite Larsson twice bringing the Hoops back from the brink with well-taken equalisers.

Worse was to come in the league where, despite a 4-0 win over Kilmarnock on the final day, Celtic ended up second to Rangers – with the two teams separated by an excruciating one-goal difference in the standings.

NOW READ… Where are they now? Martin O'Neill’s Treble-winning Celtic side of 2000/01