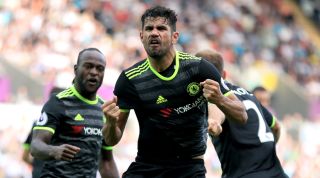 Diego Costa is a pantomime villain and, just as he does at every other away ground in the country, quickly provoked the crowd with his roughhousing style. But beyond the theatrics and the inconvenient truth that he might have been sent off (again), he was excellent: the Chelsea striker is notoriously a trade-off between the good and the bad and, narrowly, the good won out at the Liberty Stadium.

His two goals were well taken, but his overall attacking involvement was higher than it has been for some time. He had more shots (5) than any other player, was fouled more often than anyone else (7 times) and, during Swansea's brief momentum surges, helped his side to regain a foothold in their opponent's half.

His reputation depends on goals, unquestionably, but at his best Costa is also a key component in his side's build-up. Against Swansea, that was a key part of his performance and, alongside his array of shots and goals, he held the ball up well, laid it off intelligently, and was frequently the pivot around which Chelsea broke.

His combination with Eden Hazard (5 passes given, 11 received) was particularly potent and, though he may ultimately be judged on whether he changes the score, Costa's role in deeper areas shouldn’t be underplayed.

A theme of Chelsea's win over Burnley had been their ability to stretch the pitch against Sean Dyche's 4-4-2 system, creating space into which Eden Hazard and Willian were able to penetrate.

Francesco Guidolin's 3-5-1-1 was presumably constructed with the intention of plugging those gaps and, initially, it was highly restricting – albeit with the consequence of limited attacking production. Half an hour into the game, with Gylfi Sigurdsson orbiting around an isolated Fernando Llorente, Swansea had completed just a single pass into the visitors’ box.

The intention was there, with Jack Cork, Ki Sung-yueng and Leroy Fer taking turns to play towards the final third, but without truly ambitious wing-backs (Neil Taylor and Kyle Naughton occupied advanced positions, but without ever threatening to stretch the pitch) there were few advanced options.

That, and Diego Costa's opening goal, necessitated the 39th-minute change: Taylor was withdrawn, Modou Barrow introduced and the starting system ditched for a bolder 4-3-3. It was forced upon Guidolin by circumstance, but it was also illustrative of the situation Swansea currently find themselves in: they have a tactically astute manager and a good set of players, but there's still some distance between the two.

While the Italian professed himself to be pleased with the opening 20 minutes and suggested that his 3-5-1-1 formation will return in future, his players will have to a conquer a steep learning curve if they are to be successful with it.

Nevertheless, their response to being a goal down was positive. Fer became increasingly prominent in the second half and Cork, emboldened by the wider range of options and supported by an orthodox full-back tandem, had a greater influence on the game's rhythm. Though generally still reliant on counter-punching and limited to attacking in bursts, Swansea did begin to exert more pressure in Chelsea's third and, alongside improved individual performances, that was a consequence of their manager's flexibility.

3. Ivanovic is on borrowed time

Branislav Ivanovic is showing his age. While still a stable enough defender, the Serb seems destined to be one of the first victims of Antonio Conte's reign.

Chelsea are built on width now and have quickly become adept at springing their attacking wide players into space. Outside of transitional phases, however, they also rely on overlapping full-backs to provide penetration. Ivanovic will turn 33 this season and, though never particularly quick, he now noticeably lacks the athleticism to reach the top of the pitch at the right moments.

He doesn't really sprint anymore, rather he meanders and, when playing on the touchline closest to his manager, spends entire halves being berated with positional corrections. Late on, with Chelsea camped in the Swansea half, he did create the melee from which Costa spectacularly equalised, but it was an all-too-rare foray into a pertinent position.

On the other side of the pitch, the combination between Hazard and Cesar Azpilicueta was cohesive, and the Spaniard managed to find his winger with 12 different passes. By contrast, Ivanovic managed to find the dangerous Willian just five times and, given how important the flanks are to Chelsea, that was perhaps symptomatic of the need for improvement. With Marcos Alonso now at Stamford Bridge and Azpilicueta an accomplished right-back, Ivanovic should be feeling increasingly vulnerable.

Swansea boss Guidolin deserves praise for this one. Substitutions before half-time are unconventional and, given the likely reaction of the withdrawn player, it takes a brave manager to make them.

However, though Neil Taylor did little wrong, his replacement was imperative: a goal behind and with no pace on the field, the Swans needed dynamism and Modou Barrow provided it. His performance didn't comprise dazzling runs or any real trickery, but he provided a theoretical danger – and ultimately created the counter-attack which led to Swansea's penalty.

Equally, though, Barrow equipped his team with a valuable out-ball while they were under second-half pressure and allowed them to exit long into the deep channels. Had it not also been for Hazard's cynical tactical foul, he might well have also broken away to score a late winner.

Guidolin admitted in his press conference that it was the first time in his career that he’d substituted a player before half-time, but that he did showed a determination to change the game. Passive management rarely ends well and, on this occasion, being proactive retrieved a point from a game Swansea would otherwise have lost.