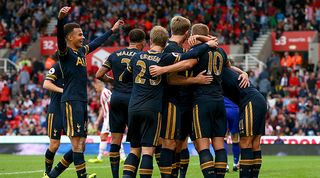 Tottenham eased to a 4-0 win at Stoke with two goals from Son Heung-Min followed by efforts from England pair Dele Alli and Harry Kane, the latter breaking something of a drought by his standards.

Tottenham aren’t disturbed by wet and windy days in Stoke

The away side were dominant from the very start in that performance last season and looked very much the title-challenging side before they hit a stumbling block in the next two matches. This time around Stoke were the better team in the opening exchanges, although Spurs showed a mental resilience to overcome the initial flourish.

They certainly don’t fear a trip to the Potteries, with more wins than any other Premier League team at the ground. The venue may have undergone a name change since their last visit, but Mauricio Pochettino’s men are still more than comfortable in the surroundings.

The three attackers behind Harry Kane all caused Stoke problems, even if the England striker still looked out of sorts, as his touch frequently let him down and he made fewer runs into the channels. He did manage to get a goal when the game became stretched late on, which will definitely give him confidence. It was only his second goal in August and September in his Spurs career.

However, it didn’t matter for Tottenham with Son Heung-Min, Christian Eriksen and Dele Alli in this kind of form. Alli almost surprised Shay Given in the 25th minute with a scoop shot, but the former Aston Villa and Newcastle goalkeeper was able to palm it away to safety.

On the half-hour mark, Son’s pass was intercepted by Marko Arnautovic, but the wide man could only get a boot to it and divert it into the path of Alli. The No.10 would have been offside had the pass been direct from Son to him, although the opportunity took him completely by surprise, as he pulled the ball wide of the post before a little glance towards the linesman in a hope that the official would save his blushes.

Eriksen shows his commitment to the cause

Eriksen signed a new contract this week, after a summer of speculation surrounded not only his future at the club, but also his perceived wage demands. “Perhaps subconsciously, the speculation can affect you when you are in the process of negotiating your future,” said Pochettino before the game.

The attacking midfielder provided 13 assists last term and weighed in with six goals of his own, but his pass completion rate and passes in general have been lower in the first three games of the new campaign. He was back creating chances once again, when he beat Joe Allen with relative ease in the 41st minute before pulling it back for Son to sidefoot into the net and open the scoring.

Just after half-time he pulled a looped ball out of the air then forced Given into a save at his near post. The Danish playmaker set-up Son for his and Tottenham’s second in the 56th minute.

In all Eriksen created five chances, made two take-ons and 44 passes before he left the pitch to a standing ovation from the away fans. Kyle Walker laid the ball on a plate for Alli to make it 3-0 with a third of the encounter still remaining and then Kane added the fourth in the 70th minute.

Since the opening day of the season against Middlesbrough, Mark Hughes has swapped from a 4-2-3-1 system to a 4-3-3. This appeared to be due to the calf injury to Xherdan Shaqiri, but it may also be dependent on the opposition. Manchester City, Everton and now Tottenham have all seen Hughes line-up with a three-man midfield.

Stoke started very brightly against Tottenham and certainly didn’t look like a side that were bottom of the table. Wilfried Bony saw an effort blocked inside the opening two minutes before Arnautovic saw a goal ruled out for offside two minutes later. Giannelli Imbula had played an excellent ball behind the Spurs defence for the Austrian forward to run onto.

Imbula and Allen initially played very high up the pitch and looked to press the Tottenham pairing of Eric Dier and Victor Wanyama at the earliest opportunity; the shape often reflected more of a 4-1-4-1. Glenn Whelan anchored the trio, although he was able to switch with Imbula during the game to ensure the tempo remained higher.

Pochettino responded in the second half by removing Wanyama and putting Erik Lamela on the pitch, which ensured that Stoke could no longer afford to use their midfielders in such an advanced position.

It may have been a heavy defeat for Stoke, but it happened in a very different manner to their previous meeting with Spurs.

Hughes’ team still haven’t scored a league goal from open play this season. They’ve only scored twice all told in their opening four matches, and both came from dead-ball situations: Shaqiri hit a superb free-kick against Middlesbrough and Bojan scored from the spot in the 4-1 defeat to Manchester City.

The deadline-day signing of Bony should help to solve the problem, once the forward can get a run of games with his new team-mates. He had scored in his last two Premier League starts against Spurs, but was unable to find the target this time, despite causing a threat.

However, he needs others to create chances for him to finish, which wouldn’t be as much of an issue if Stoke had Shaqiri and Bojan on the pitch. In previous games the lone striker for Stoke has appeared a little isolated, but there were positive signs in the first half.

His movement was very good: at times, his positioning toward the right wing dragged Jan Vertonghen sideways and allowed Jonathan Walters space to attack from a diagonal angle.

Stoke lost control of the game when Hughes lost his temper and was escorted from the side of the pitch. He gestured to the fans to raise the noise, but perhaps he should have advised his players not to lose their heads. Six minutes later Spurs took a lead they would never lose.