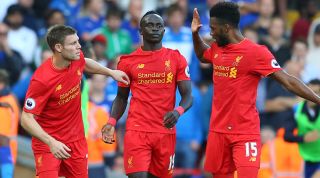 Performance of the Weekend: Liverpool (vs Leicester City)

Even Jurgen Klopp would admit that his team is an oddity. He has made Liverpool more likeable and has replaced Brendan Rodgers' droning self-regard with some authentic charisma, but he hasn't conclusively made the first team better. At times, they've been splendid to watch and have played with the Dortmund-flavoured zeal promised, but on other occasions – typically against lesser opponents – they've been a reductive, tactical mess.

But Anfield on Saturday was different. With a new £115 million stand looming above them, Liverpool cut through Leicester City with ruthless panache. Leicester may be embroiled in a post-May hangover and clearly have some midfield rebalancing to do following the sale of N'Golo Kante, but their decline has been exaggerated: they remain an extremely stubborn side and a dangerous counter-attacking opponent.

Not that it showed, though. Klopp's team, specifically his patchwork defence, stumbled periodically, but they still produced their most original football of the season. Their energy is often admired and their new intensity has already been over-described, but the weekend might have represented a maturation point of sorts.

Rather than being simply a product of numerical mismatches, their chance creation relied upon intelligent distribution and well-timed runs; Roberto Firmino floated off his markers throughout the afternoon, Adam Lallana repeatedly spun into neatly constructed spaces, and Sadio Mane was his incendiary default. Liverpool created many opportunities and that was the essence of their win, but they also played with a great flourish; they were style and substance, imagination and execution. It was Klopp's football in practice, rather than just in vague theory.

Over the past 12 months, they have often looked more comfortable as an underdog and have tended to struggle against lesser opponents. Contrarily, their most impressive displays have all come in games in which they themselves were expected to be swept aside: against Manchester City at the Etihad, Arsenal at the Emirates and Chelsea at Stamford Bridge.

So Saturday felt significant and like a correction of that strange trend. Leicester are the defending champions and they deserve to be respected as such, but Liverpool made them look again like a newly promoted team. Whatever malaise Claudio Ranieri's players may be suffering through, that hasn't been the case for a very long time.

Goal of the Weekend: Troy Deeney (vs West Ham)

Like all of the goals Watford scored on Saturday, this had its roots in dreadful West Ham defending. But, although ineptitude and opportunism put Troy Deeney in a position to score, it was faultless execution which allowed him to actually do so.

It's one of those goals which gets better with each viewing. At first glance, it seemed simple enough: with Adrian in no position to protect an unguarded net, Deeney's lofted finish appeared routine for a Premier League forward. That was deceptive, though, because even amateur players will know just how difficult it is to retain balance and produce a proper contact when pivoting sharply.

Deeley's moment is around 1:25 below, but the match was littered with highlights

Additionally, Cheikhou Kouyate recovered enough ground to take most of the goal away from Deeney and yet Watford's captain managed to find the only unguarded part of the net. His shot had just enough loft and was struck with just enough power. With no margin for error, he produced something perfect.

The reaction to a goal is also partly determined by its scorer and, if an archetypal Deeney moment exists, then this certainly wasn't it. He's a throwback player and, although not industrial or unskilled, his rise in the game has been based more on force of will than any God-given gifts. He may well be an astute finisher, but his repertoire more commonly involves brief, effective surges of power and intelligent link play. This type of goal – all feathered touch and finesse – doesn't appear too often in his highlight reel.

The more you watch it, the more you'll appreciate it.

Player of the Weekend: Kevin De Bruyne (vs Manchester United)

To think, there are still people who will tell you that Kevin De Bruyne wasn't worth what Manchester City paid for him.

Analysed! Aguero vs Ibrahimovic: how the pair are shaping up under new bosses

His performance in the Manchester derby was a further belittling of that viewpoint: he was outstanding. Pep Guardiola's new forward line is an intricate mechanism which doesn't rely on any one player, but De Bruyne is easily the most destructive element within it. David Silva was highly influential at Old Trafford, Fernandinho was exceptional in both halves of the pitch, and Kelechi Iheanacho did an admirable job in filling the Sergio Aguero-shaped hole. For pyrotechnics and raw, result-defining influence, though, De Bruyne was unrivalled.

Manchester United didn't defend well and their midfield was hopelessly porous, but those failings were exaggerated by the Belgian and his ability to collect possession in dangerous areas and drive the ball rapidly upfield.

His goal was wonderfully well taken, of course, and he created the second via the post, but it was an overall performance of exemplary instinct. De Bruyne is extremely gifted and, when on the ball, he's dangerous off either foot and in many different ways, but his game is really powered by awareness. On Saturday he was a beneficiary of the surrounding system, but he was as influential as he was because, as is his knack, he was able to feel the vulnerabilities in the opposing defence.

As an example, that was the quality at the heart of the opening goal: he read Iheanacho's flick quicker than any of the defenders and that attacking intelligence allowed him to nip in front of Daley Blind. More broadly, a feature of his display at Old Trafford was his ability to drift into the areas behind Paul Pogba and Marouane Fellaini, neither of whom subdued him in any way or came close to affecting the flow of possession towards him.

But there was something intangibly great about him on Saturday, too. The very best players are exhilarating every time they touch the ball and De Bruyne has that quality. When he's involved in a passage of play, it always seems as if something could happen – and that was in evidence again at Old Trafford. His touches created ripples in the game and just the theory of what he might be able to do to the United defence appeared to create chaos in Jose Mourinho's backline.

And wasn't he great fun to watch, too? Football is tribal and passionate, but it's also entertainment and there's something to be said for a player who, even in a game as overhyped as United vs City, was able to give everyone their money's worth. He's a joy and, say it quietly: he might just be the best player in the country.

Moan of the Weekend: the reaction to Claudio Bravo

The way English players are treated in this country is really peculiar. On the one hand, supporters, writers, and pundits take great pleasure in building domestic players up and then, invariably after the national team's latest comedic failing, knocking them back down again. When that judgement comes from an outsider, though, they reliably circle the wagons. And nobody provides a better contemporary example of that than Joe Hart.

By the time Manchester City's long-term goalkeeper had left on loan for Torino, his career history had endured a contrived rewrite. His poor European Championship and Pep Guardiola's determination that he was technically unsuited to the club's future direction meant that the nation felt compelled to turn its back on Hart. "No" we lied, "we never really rated him."

Bravo endured a difficult debut in the Premier League. A communication problem gifted Manchester United a goal and his general uncertainty could well have cost his new side two of their three points. A poor start, but one which was easy to rationalise: the Chilean won't be the last goalkeeper to look vulnerable during his first appearance and few will be asked to begin their Premier League life in the rare air of a Manchester derby. Was he nervous? Is he having difficulties with the language? Who knows, but he will get better and, when he does, all the theories supporting his arrival will be proven correct.

Gary McAllister, One-on-One: 'Vinnie Jones showed me around Leeds in a limo – and I was replacing him'

But here's the contradiction: it took little more than half an hour for some to reverse their position. After Zlatan Ibrahimovic had volleyed in for United, Hart was "ours" again and the fashionable Catalonian evangelist had made a recklessly premature judgement. That was, until England's No.1 himself fumbled a cross which led to an Atalanta goal on debut for Torino. It was English footballing attitudes at their disingenuous worse, caught somewhere between odd insecurity and fierce resistance to new ideas.