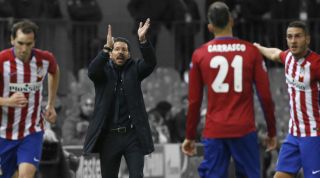 Atletico Madrid take on Eredivisie champions PSV Eindhoven in the first leg of their last 16 Champions League tie on Wednesday.

Bayern Munich, Real Madrid and holders Barcelona are the three favourites to lift the trophy at San Siro come May, but Diego Simeone’s charges should certainly not be written off as they attempt to go one better two seasons on from their defeat to city rivals in the 2014 final in Lisbon.

A glance at Atletico’s list of results this season throws up an awful lot of zeros – most of them in the opposition’s column. The Rojiblancos’ backline has been breached only 11 times in La Liga – that’s a miserly 0.44 goals conceded per game – and just three times in six Champions League encounters. They’ve also registered a remarkable 23 clean sheets in 37 matches in all competitions, and only let in more than one goal in four of their fixtures thus far.

Atletico’s defensive solidity is testament to organisation and discipline as much as individual talent. Indeed, Diego Godin may be one of the best centre-halves in the world, Jose Gimenez one of the most promising and Jan Oblak a superb young goalkeeper, but Atleti’s resolve at the back is largely a result of the strength of their collective.

Simeone’s side’s ability to suffocate opponents with their energy, tenacity and constant pressure may not always make for the most entertaining spectacle, but it’s certainly effective in terms of shutting games down and denying even the most creative players space to thrive.

You have to score to win football matches, and against Atletico that’s far easier said than done.

It’s not all about locking the back door and chucking away the key, though. Atletico have some extremely talented attacking players in their ranks, with a number of options available to Simeone depending on the circumstances and task awaiting his side.

Antoine Griezmann has developed into one of the best forwards in Europe over the last couple of years, the France international having hit 19 goals in 34 appearances this term. Fernando Torres and Luciano Vietto – one of the breakout stars of 2014/15 with Villarreal – have had to wait patiently in reserve, while Koke, Yannick Ferreira Carrasco, Angel Correa and Oliver Torres have all weighed in with contributions of their own.

Atleti have lined up in 4-4-2, 4-3-3 and 4-2-3-1 formations this year, with different systems opening up opportunities for different personnel. Having multiple options at their disposal can only work in their favour.

The modern era of the superclub has inevitably given rise to the ‘supermanager’, with Carlo Ancelotti, Pep Guardiola and Jose Mourinho beginning to rotate between the monied members of Europe’s elite every few seasons.

While Simeone’s loyalty to Atletico is such that he is likely to remain at the Vicente Calderon until 2017 at the earliest, his accomplishments as a manager to date are enough for him to already belong alongside the above names in the very highest bracket.

The best measure of any coach is whether – and to what extent – he is able to create a team that amounts to more than the sum of its parts, a test that the Argentine continues to pass with flying colours. In a tight Champions League tie that could go either way, the effervescent and dark-suited man on the touchline could make all the difference.

4. They love being underdogs

When Atletico won La Liga against all odds in 2013/14, they did so while averaging just 48.9% possession (by way of comparison, the equivalent figure for last season’s champions Barcelona was 59%). Atleti are most comfortable when they are able to cede possession and sit deep in a low block, before bursting forward with speed on the counter-attack as soon as the ball changes hands.

As opponents have become more aware of their capabilities, though, such a gameplan has been increasingly difficult to implement, with Atletico routinely allowed more of the ball and tasked with prising open deep and compact defensive shapes.

That has been evident at times this term, and while Atleti have been able to find a way through more often than not, they still don’t look entirely at ease when they’re prevented from playing their natural game, such as in the 0-0 draw at Astana (in fairness, over 3,500 miles away by plane) in the Champions League group stage.

In the knockout rounds, things are likely to be different: rather than facing sides who are battling against relegation or fighting for a top-half finish, Atleti will be taking on domestic champions, league leaders and sides who are used to dominating the ball and controlling proceedings in the majority of games they play. That, in theory, should allow them to do what they do best and assume their preferred role of underdogs.

The aforementioned La Liga triumph remains the undoubted pinnacle of Simeone’s achievements in the Spanish capital, but there’s a comprehensible argument that Atletico are better suited to claiming success in cup competitions.

Having won the Europa League in 2012, the Copa del Rey in 2013 and reached the Champions League final two years ago, the Rojiblancos have proven they are adept at performing in two-legged knockout ties; going all the way in Europe this season is a tougher ask than any of those previous cup runs, but Atletico have shown over a number of years that their ability to smother opponents and grind out victories makes them a nightmare team to draw in tournament football.