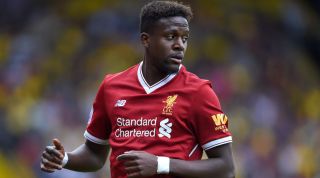 The 2017/18 campaign is Jurgen Klopp's second full season in charge at Anfield, so you'd expect his own squad to be emerging by now. However, of the XI that started Saturday's draw with Watford, only four were signed by the German (Joel Matip, Gini Wijnaldum, Sadio Mane and Mohamed Salah).

A lack of summer signings has left Klopp's squad looking worryingly thin heading into a season in which Liverpool will also have European football to contend with. The situation would have looked brighter had leading targets Naby Keita and Virgil van Dijk been added to the ranks, but those deals have - so far at least - failed to materialise.

A failure to build on last season’s top-four finish would represent a major step backwards for the Reds, and would leave Klopp needing to be far more ruthless with the players he inherited from predecessor Brendan Rodgers. There are question marks over several first-team players who arrived at the club under the previous regime and have never really convinced the Anfield faithful. Here are five of them, each facing a make-or-break season.

Nobody has made more appearances for Liverpool in the last two seasons than Clyne, with the former Southampton man featuring in 37 of the Reds’ 38 league games last season. Despite question marks over his offensive contribution (zero goals, three assists in 41 outings overall last term), Clyne is a player whose place in the team was seemingly pretty assured heading into the summer.

But a pre-season injury sustained by the England right-back has given 18-year-old Trent Alexander-Arnold an opportunity to impress. The youngster has snapped it up with both hands, impressing against Watford at the weekend before netting a superb free-kick in Tuesday's Champions League play-off against Hoffenheim.

Alexander-Arnold dominated games from right-back for Liverpool’s under-23s last season and has already showcased his quality on the biggest stage, while he possesses significantly more attacking endeavour than his senior team-mate.

Of course, a teenager cannot be expected to start every game, and Clyne will be back in the team once he returns from injury (although Klopp may consider switching him to left-back and keeping Alexander-Arnold at times), but next summer could be an interesting one if Clyne finds himself forced out by a local lad who is only going to get better.

Rarely do football fans agree on anything, but there's surely not a Liverpool supporter out there who doesn't think Lovren needs replacing. Klopp knows it and, thanks to the rather public pursuit of Van Dijk, the whole world knows it.

Lovren has already shown exactly why that’s the case with moments of calamity in both of the Reds' opening games, when he's flown into challenges out wide, conceded a penalty and generally given the Liverpool defence - and fanbase - the jitters.

He’s an adequate back-up centre-back, and should a new defender be signed that’s where he’ll spend this season. Whether he’ll be happy with that going forward remains to be seen.

After an impressive end to last season, Mignolet rightly begins this season as Liverpool’s first-choice goalkeeper. Two smart saves against Hoffenheim, including his seventh penalty stop for the club, vindicated that decision.

But the Belgian, who turns 30 this term, has failed to go a full campaign without a bad spell since moving to Anfield four years ago. He needs to deliver a consistent season if he's going to hold off the duo of Loris Karius and Danny Ward for another year and remain as No.1.

Pre-season isn't the time to judge a player, but it was hard not to notice how much more effective new signing Dominic Solanke was compared to Origi in Liverpool's friendlies this summer. While one was making a statement with eye-catching goals against Crystal Palace and Atletico Madrid, the other was missing easy opportunities in the same games.

Origi’s return of 11 goals last season was respectable for a bit-part player, but that masked his average all-round performances, which were often in lacking impetus. A 10-minute cameo at Watford on the opening day showed how ineffective he often is when replacing the effervescent Roberto Firmino; his introduction often leads to Liverpool’s attack losing energy. If Solanke starts to make an impact in competitive encounters, Origi will drop to fourth-choice forward.

He’ll be 23 next summer, when Liverpool could look to double their money on the £10m they spent on him. The only way that won’t happen is if Origi replicates the form he showed late on in 2015/16.

It’s quite incredible that Liverpool have begun the new season with Moreno as their starting left-back. The Spaniard began just two league matches last season, despite being in the squad for all 38 games. He was clearly a player Klopp didn’t trust; the German even preferred 31-year-old midfielder James Milner in an unfamilar role.

The addition of Andrew Robertson in the summer seemed to signal the end for Moreno, but an impressive showing against Bayern Munich in pre-season saw Klopp open the door for him to remain at the club. Milner has been moved back into the midfield pool to help cover for the absence of Adam Lallana and Philippe Coutinho, while Robertson is yet to make his bow.

There’s also the theory that keeping Moreno at Anfield helps make Coutinho - who lost one of his best friends when Lucas Leiva moved to Lazio - happier at a time of uncertainty.

While Klopp is happy to give Moreno a second chance, the 25-year-old must show greater maturity in his performances if he's to remain in the side. That means no wild challenges to give away free-kicks or penalties at inopportune moments. Perhaps he’d benefit further without Lovren alongside him.