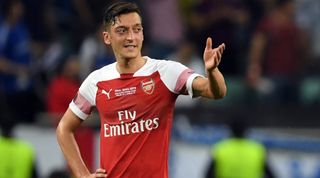 Yes, he’s still there. Aaron Ramsey’s departure means Jenkinson is the last survivor of Arsenal’s generation of young Brits. Laurent Koscielny is the only outfield player who has been at the Emirates for longer than a 2011 recruit who has become a symbol of Arsenal’s lack of ruthlessness.

This season, Jenkinson made his first Premier League start for 830 days for Arsenal. He was still only the fourth-choice right-back and while one of those ahead of him, Stephan Lichtsteiner, is leaving, that should not bring a reprieve for Arsenal’s peculiar constant. Any offer should be accepted. The problem is that Jenkinson’s salary may deter buyers.

It might be a controversial one; some even think that Sokratis is Arsenal’s best defender. The suggestions are that Koscielny and Nacho Monreal are likelier to leave. But each is older and has little resale value.

This might be Arsenal’s last chance to get a decent sum for Sokratis and, given their defensive record – 51 league goals conceded – they need an upgrade. No centre-back averaged more fouls per game in the Premier League. None collected more cautions. Some would take that as a sign of commitment. The alternative explanation is that it reflects rashness, a capacity to go to ground needlessly and a habit of conceding set-pieces in a way that can be damaging.

When Unai Emery gave Elneny the No. 4 shirt, it may have seemed a sign the Egyptian was pencilled in for a pivotal role. In fact, he started only five league games and featured in just 17 of Arsenal’s 58 matches. Matteo Guendouzi and Lucas Torreira were the midfielders who offered optimism for the future under Emery. Granit Xhaka was the automatic pick.

With Calum Chambers returning after the rare feat of impressing in midfield in Fulham’s dismal season and the versatility of Ainsley Maitland-Niles, Arsenal should cash in on Elneny – even if the sum is not very big.

The plan: hope someone notices that Mustafi is a Germany international, a World Cup winner and a player who commanded a £35 million transfer fee and assumes that makes him a high-class defender.

The problem: they may have noted his performances for Arsenal, the reaction of the supporters and the reality he was dropped by Emery.

Arsenal will never recoup their outlay. But if someone signs Mustafi, it may help them move on and bring in a more reliable figure at the back.

The best-paid player in Arsenal’s history and a man who got fewer assists than Monreal last season. It was no secret Emery had his doubts about Ozil long before his anaemic display in the Europa League final. Often omitted away from home, given one league start against top-six opponents in the final six months of the season, the creator who stopped creating goals has gone from flagship signing to flagship failure.

Even if Arsenal don’t get much of a fee, losing Ozil would free up vast amounts of room on the wage bill.

Quiz! Can you name the top 51 Dutch appearance-makers in Premier League history?