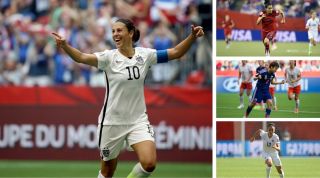 If there’s a moment from the women’s game in 2015 that will last long in the memory, it’s the US Women’s National Team captain’s goal from the halfway line against Japan in July. Scoring from the halfway line is always special. To complete a hat-trick? Yeah, OK… not bad. How about in a World Cup final? Now we're talking.

Lloyd bulldozed her team across the line at the biggest Women’s World Cup to date, helping them to emphatically end a 16-year wait to get their hands back on the trophy they almost consider their own. With over 200 caps to her name, the 33-year-old has pasted in her place in the history books for good.

2015 will go down as the most successful year of Sasic’s career, with individual, club and international honours aplenty. To the surprise of many, it also turned out to be her last as a professional footballer; the 27-year-old announced her retirement from the game in July.

The former Germany international collected the Golden Boot at the World Cup in Canada, despite Germany finishing fourth. She also scooped the Bundesliga’s top-scorer award for the second season running and helped Frankfurt to Champions League glory earlier in May.

Stating her desire to pursue other “new things in life”, she hangs her boots up next to 111 caps for Germany and with 63 international goals to her name.

A serious knee injury nearly ended Morgan’s World Cup before it had even begun. To the 26-year-old’s credit, she fought her way back to fitness to start all seven of the USA’s triumphant campaign in Canada, scoring once and earning vital penalties against Colombia and Germany.

The Olympic, world and National Women’s Soccer League champion – who is also a best-selling author, with her series The Kicks – became one of the first female players to make the cover of FIFA 16, appearing alongside Lionel Messi on the United States edition.

RECOMMENDED From outcast to goal-grabber to TV icon: the US star getting international attention

Instrumental in Japan’s run to a second successive final, and representing her country at a fourth World Cup, Miyama joins Lloyd and Sasic as a finalist for the FIFA Women’s World Player of the Year Award.

The captain scored the winner against Switzerland, assisted Japan’s late quarter-final winner against Australia and forced one of her side’s consolation goals in the tournament decider.

The two-time Asian Player of the Year, who has 156 caps, also helped Japan to their first AFC Women’s Asian Cup title in Vietnam and was named the tournament’s Most Valuable Player.

Awarded the Silver Ball award at the FIFA Women’s World Cup and finishing second behind Sasic in UEFA’s Best Women’s Player in Europe Award, 2015 was undoubtedly a breakthrough year for Henry.

The 26-year-old defensive midfielder did the League and Cup double with Lyon and scored a wonder goal in the World Cup group stages against Mexico, which she described as “a dream come true”.

Disappointed not to progress further than the quarter-finals with les Bleus, Henry is determined to achieve more of her dreams and is certainly one to watch in 2016.

Her incredible performances in Canada – the most memorable coming against Norway when her spectacular strike sealed England’s first World Cup knockout win – earned her a place in the tournament’s All-Star squad in August and England Women’s Player of the Year Award 2015 in December.

Tipped to become the best right-back in the world by England manager Mark Sampson, the 24-year-old will be hoping to add more domestic trophies to her already-impressive haul next season and help England on the road to Euro 2017.

More features every day on FFT.com • The Best 100 Players in the World