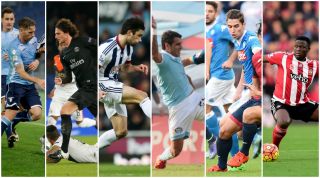 Every transfer window Arsenal are linked with numerous holding-midfielders. And with injuries to Francis Coquelin and Santi Cazorla that's set to continue in January, with a purchase looking both desperately necessary and likely.

Below are six of Arsene Wenger's best options across Europe (who the North London outfit have been linked with recently), analysed using Stats Zone, along with the possibility of prising them away in January.

Paris Saint-Germain have a wealth of holding-midfield personnel, as the 20-year-old has to contend with Thiago Motta, Blaise Matiudi, Marco Verratti and Benjamin Stambouli for a regular place in the line-up.

Only right-back Serge Aurier averages more tackles in the squad than the young Parisian, while his ability to drive up the pitch combined with his through-ball capacity is an added attacking bonus.

Rabiot has started eight matches in Ligue 1 this season, although he clearly feels that he should feature in most games at this stage of his development and his recent comments have angered supporters.

"I asked the president for a loan move in January if my time on the field is insufficient," confesses Rabiot. "It’s something that he can’t refuse me – I know he likes me very much."

Arsenal might not be able to get him on a permanent deal yet, but he would certainly prove to be an effective stop-gap until the injury problems at the Emirates Stadium subside a little.

The powerful box-to-box Southampton midfielder is reasonable in the tackle and has a decent interception rate, as a good all-round footballer. He can carry the ball from deep into attacking areas, while his physical capabilities make him useful when denying opposition counter-attacks. However, Wanyama prefers to press higher up the pitch as it's not his primary strength to protect the back four.

He would probably work better alongside Mathieu Flamini rather than Aaron Ramsey, which might negate some of Arsenal's creativity in the final third. The Kenyan did wish to be reunited with his former boss Mauricio Pochettino at Spurs, but Saints had already lost Morgan Schneiderlein to Manchester United.

Saints manager Ronald Koeman is keen not to lose more players and add to the squad during the transfer window, although they do have Oriol Romeu as a ready-made replacement. "We will sell nobody in January. Nobody. Even when they pay 100 million [pounds]," stated the Dutchman last week.

This Lazio midfielder has been linked with a move to England, as Manchester United and Chelsea have joined Arsenal as potential suitors. With six defeats in the last eight Serie A matches, the Rome club's season isn't going as well as last term, so the player may be more inclined to leave immediately.

However, the 29-year-old would command a fairly high transfer fee due to his complete technique and additional goal threat. Biglia likes to shoot from distance, which has seen him score four goals in all competitions this season, while his set-piece ability is a useful commodity for any side.

Equally adept at passing and tackling, the Argentina international is wanted across Europe for his central dominance. "We can't say yet [if he will move in January]," admited his representative Enzo Montepaone. "Biglia is happy at Lazio, but we must think about what's best for his career."

It would be ironic for Yacob to profit from Coquelin's absence given that he was the other player involved in the challenge that left the Frenchman out until March. West Brom's Argentine destroyer is one of the most underrated players in the Premier League and has adapted superbly since arriving in 2012.

Few players make the move directly from South America to the British Isles, but Yacob has had no such qualms with the transition in culture. The tenacious tackler has started all but two of the league matches for Tony Pulis' team, as he missed the recent draw with Tottenham due to suspension.

Yacob can be a little over zealous on occasions, which leads to a number of fouls, while he's more comfortable in a low defensive block. He's better in possession than most people's perceptions, as he looks to shift the ball into wide areas at the earliest opportunity.

Another Argentine, 29-year-old Fernandez would be considerably cheaper than most of the midfield alternatives. Fernandez could be signed for as little as £4 million, with Atletico Madrid also interested, while Celta Vigo own only 50% of the player's rights with Velez Sarsfield in charge of the other half.

The adaptable midfielder makes the second highest amount of tackles in La Liga and has a superb range of passing, although he may struggle to adjust to the Premier League at this age.

He gives Celta the platform with which to attack, as he's comfortable in recycling the ball both backwards and forwards; with the club over-performing in fourth position this term.

In the 4-1 victory over possession-obsessed Barcelona, only three players on the pitch made more passes, while he matched Andres Iniesta with 39 completed balls to fellow team-mates.

The pass master operates a little differently from the aforementioned deep-lying midfielders, as he makes over 20 more passes per match than any other player in Serie A.

For a team with such good ball retention, Jorginho seems like the perfect acquisition, although he isn't a natural tackler and, should he sign, it would probably require a restructuring of the midfield.

At Napoli, it's Allan that provides the energy and strength, while Arsenal would need a player in the style of their former midfielder Abou Diaby in order to physically impose themselves slightly further forward in the bigger matches. Jorginho specialises in intercepting the ball due to his intelligent positioning, and his through-balls create numerous chances for the attackers.

Agent Joao Santos has previously talked about the Gunners' interest, but it would likely take a large fee for Napoli to relinquish their hold on the midfielder as they sit just two points off the top in Italy.