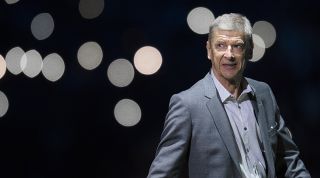 Real Madrid are seeking their third head coach of the year after sacking Julen Lopetegui on Monday.

A 5-1 Clasico hammering at the hands of Barcelona proved the final straw for Madrid's notoriously impatient board, who axed Lopetegui after a run of one win in seven in all competitions.

The ex-Porto boss lasted only four months after agreeing to succeed Zinedine Zidane, and his reign starting in infamy after Spain sacked him on the eve of the World Cup.

SEE ALSO How did it go so wrong for Julen Lopetegui at Real Madrid?

It was expected that former Chelsea boss Antonio Conte would take charge, but reported problems in negotiating a contract have led to suggestions Madrid could turn elsewhere, and Santi Solari has been placed in temporary charge.

So, who are the contenders to take up Lopetegui's position permanently? We look at Conte and Madrid's alternative options...

Reports in Italy have claimed Conte has already been approached by Madrid's hierarchy, and his record certainly stands up to scrutiny. A trio of Serie A titles with Juventus showed he can deliver to high expectations, and the Italian also led Chelsea to Premier League glory in his first season at the club.

However, despite overseeing an FA Cup win in May, Conte was sacked amid a reported breakdown in his relationship with the club's board and senior players. Given rumours about disagreements over a proposed contract, would Madrid prefer a less confrontational character?

Former players often feature heavily in speculation about coaching vacancies, especially so at Madrid, who enjoyed great success when they promoted Castilla boss Zidane to the main job.

Guti left to become assistant coach at Besiktas this year but he is arguably the closest to a Zidane-style appointment that Madrid could make, having won five La Liga titles and a trio of Champions Leagues as a player with the club.

An alternative selection would be the Castilla's current coach and temporary appointment Solari, another former player and one who helped set up Zidane's famous volley in the Champions League final win over Bayer Leverkusen in 2002.

A popular figure in Madrid circles, Solari hasn't exactly wowed with his results in charge of the B team – although they have suffered only one defeat in 10 matches in the Segunda B this season.

Tottenham manager Pochettino has long been touted as a future Madrid coach and he was reportedly on their shortlist to succeed Zidane before Lopetegui was appointed. The former Espanyol player and coach has repeatedly said he would never manage Barcelona, which will likely endear him to the Madrid faithful.

But, as brilliant a job as the 46-year-old has done at Spurs, the lack of any trophies on his record means he may not be an automatic selection. Pochettino also signed a five-year contract in May.

Said to be a particular favourite among elements of the Madrid board, Martinez has rebuilt his top-level coaching career with an accomplished time in charge of Belgium. While his detailed agreement with the national team would make it difficult for Madrid to prise him away, you would expect Martinez to be tempted by the prospect of the top job in his homeland.

Available after his sacking by Monaco this month, Jardim could be an astute choice as well as an affordable one. The Portuguese is extremely experienced, despite only being 44, and winning the Ligue 1 title in 2016-17 by triumphing over mega-rich Paris Saint-Germain was a considerable feat. Jardim's squad was subsequently dismantled, so his dismissal should not count heavily against him.

Having recharged his batteries following his Arsenal departure, Wenger would surely relish the opportunity to lead arguably the biggest club in the world. But with the Gunners slipping out of contention for trophies in the latter period of his 22-year reign, questions would be asked about whether Wenger is still up for the challenge. And, at 69, he would hardly be a long-term appointment.