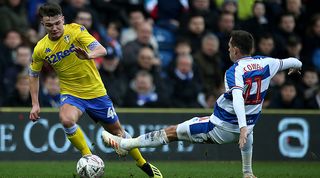 Like Tottenham's summer signing Jack Clarke, the 19-year-old is another Thorp Arch academy graduate looking to kick on and cement a first-team place for the Yorkshire side.

Shackleton's first-team bow came last August in Leeds's 4-1 win over Derby, where he came on as a substitute. He went on to feature 23 more times under Marcelo Bielsa in 2018/19, including a start in the play-off semi-final second leg (again, against Derby) where the Whites were knocked out 4-3 on aggregate in controversial fashion.

Bielsa is keen to mould the youngster into a right-wing-back, but Shackleton has played in central midfield throughout his time in the youth ranks at Leeds.

He was also involved in the recent Under-20s Toulon Tournament, making his England debut in a 3-2 defeat against Portugal which sent the Young Lions crashing out in the group stage.

This will be the 29-year-old forward's first season in the second tier. Taylor was one of the most prolific players in England’s top four divisions last season for Charlton, scoring 25 goals and providing 13 assists in league and cup for the Addicks. His 25-yard free-kick in a 4-0 home win against Scunthorpe in April was nominated for the League One goal of the season.

Before Taylor was brought to SE7 by Lee Bowyer last summer on a free transfer, the Montserrat international spent three seasons across south London at AFC Wimbledon, scoring 55 times and becoming the club's record Football League goalscorer. He also was on target for the Dons in their 2016 League Two play-off final win against Plymouth Argyle.

The Bees wasted no time looking for a new centre-back at the start of the transfer window, with Chris Mepham yet to be replaced following his transfer to Bournemouth in January. Ezri Konsa has also left the club for Aston Villa this summer, making Pinnock’s addition all the more important. He played every game for Barnsley in their promotion-winning League One campaign last season.

The former Dulwich Hamlet player is strong in the air and also has a tendency to play short passes out of defence higher up the pitch, which will fit in nicely with Brentford’s possession-based style of play.

Pinnock will want to make it third time lucky in west London, after achieving promotion with two of his previous clubs in Barnsley and Forest Green Rovers. Third time lucky for the 26-year-old?

The England Under-20 international and younger brother of Rangers captain James Tavernier is another young talent who will be relishing another season in the Championship. It will be interesting to see how he performs for Middlesbrough under new boss Jonathan Woodgate, after finding minutes tough to come by in a defensive-minded Tony Pulis side.

Tavernier predominantly plays out on the left wing and his attributes make him well suited to that role. This will be the season where he tries to establish himself as a regular starter at Boro - something he could only manage twice under Tony Pulis last campaign, as he scored three times in 20 appearances.

Bournemouth are said to be keeping a close eye on the 20-year old, but Woodgate & Co. will hope he remains on Teesside for the foreseeable future.

The Rams continue to thrive in the loan market, having snared England Under-21 international Dowell until the end of the season.

After helping develop loanees Mason Mount, Harry Wilson and Fikayo Tomori among others, the East Midlands club have a growing reputation of providing minutes to emerging talent, and that's unlikely to change under new boss Phillip Cocu.

Attacking midfielder Dowell was part of Sheffield United’s promotion-winning campaign last term, making 16 appearances for the Blades after joining on loan from Everton for the second half of 2018/19. He also featured in England's recent Under-21 Euro Championship campaign, playing all three group games as Aidy Boothroyd's side disappointingly failed to make it into the knockout stages.

The Croatian connection is already fixed at The Hawthorns, afer new boss Slaven Bilic moved to bring his countryman and hot prospect Krovinovic to the West Midlands on a season-long loan deal from Benfica.

He only played his first pre-season game for West Brom a week ago, so may be a little short on practice with his new side to start the season, but the good news is that Baggies are already liking the look of what they've seen from their new attacking midfielder. The 23-year old is craving regular game time after making just four appearances in the Primeira Liga for Benfica last season.

Krovinovic is yet to be capped by Croatia's senior team, but he's played 11 times for their under-21s. His technical ability earmarks him as one of the Championship's most exciting players this term, but only time will tell.

Grant was Jan Siewert’s first signing for Huddersfield back in January, and instantly made an impact for the Terriers despite an awful season in which they become only the third team in history to be relegated from the Premier League with six games remaining.

The 21-year-old made 13 appearances for the Yorkshire club, scoring four goals. A step up from League One to the top division is no easy feat, but Grant wasn’t fazed by the quality of the opposition while playing in a weak side. His standout performance came in Huddersfield's 4-3 defeat at West Ham, where he netted twice - including a fine curling strike from 20 yards. Huddersfield fans named him their player of the month for March.

A full first season in the Championship awaits for the forward, as the Terriers seek an immediate return to the top flight.

With Swansea’s team packing an average age of just 25.5 years, new manager Steve Cooper has been picked for his experience managing youth – the 39-year-old previously bossed Liverpool’s academy and the England U16 and U17 sides. The 21-year-old Rodon will be among those he is most pleased to have on board in south Wales.

Last season was the ball-playing centre-back's breakthrough into Swansea's first team, as he made 27 appearances in the Championship. If it wasn't for a broken bone in his foot which kept him out for six weeks halfway through the season, that tally would have been higher.

This will be Rodon's second full season at this level, and he is likely to be among Swansea’s star performers.