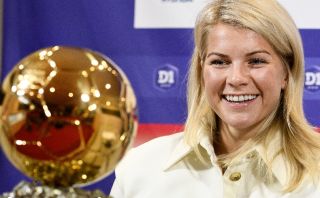 When Lionel Messi quit Argentina in the summer of 2016, it always seemed likely that he would reverse his decision. The World Cup was coming up two years later and, like 99% of players, Messi would never want to miss a chance to win it.

All of which makes it so unusual that, for this summer’s World Cup, the best player in the world will be absent. Ada Hegerberg, the winner of the 2018 Ballon d’Or Féminin, will be working with French media when Norway compete for the trophy.

Hegerberg is not injured. At 23, she’s in excellent form. When Lyon beat Barcelona 4-1 in the Champions League final in May, she scored a hat-trick.

But Hegerberg is involved in a stand-off that has divided opinion in Norway, to the extent that even Real Madrid's Norwegian starlet Martin Odegaard has had his say.

The problems began at Euro 2017, when Norway crashed out in the group stage with zero points and zero goals. Merely qualifying for the Euros would have been a success for the men’s team, but the women – past winners of the World Cup (1995) and the Euros (1987, 1993) – have higher standards. After the debacle, Hegerberg shocked the nation. She quit the team.

Hegerberg cited a lack of preparation, execution and communication from the Norwegian Football Federation (NFF). A few days later she said the team had lacked clear targets at the tournament, and that they have not evaluated their failure properly. “The decision isn’t just a consequence of the Euros,” her initial statement read. “It’s based on my experiences with the national team over a long period of time.”

Norway, who were just about to begin the World Cup qualifiers, had lost their best player. Some reacted by accusing Hegerberg of abandoning the team in a difficult moment. Others attacked the NFF for failing to meet her standards. For their part, the NFF claimed that Hegerberg had never raised any such concerns internally, and said the decision had come out of the blue.

This response astonished Hegerberg, who said she had voiced concerns several times, and who now felt that her decision had already been vindicated.

Other details appeared. Hegerberg said she felt she had become a worse player every time she had met up with the team, a remark that reportedly upset some of the players. A year after she'd quit the team, Hegerberg had deleted some of them from her social media accounts.

The coach, Martin Sjögren, said that no player should have to be convinced to play for Norway. When Hegerberg was up for FIFA’s player of the year award in 2018, the Swede gave her none of his three votes.

Hegerberg also said that if she had to miss the World Cup because of her decision, then so be it. She has proposed a series of changes to the NFF, but the federation has accepted little blame even though they’d like her to return. They can point to the performances of the team during qualification, where Norway won seven out of eight games.

No progress seemed likely in the run-up to the World Cup. Until this week, that is, when the situation became even more controversial.

On Wednesday, the Norwegian magazine Josimar ran an interview with Hegerberg in which she further explained her stance. She felt the NFF failed to prioritise the women’s team during her time there, an impression she'd had since she began in the youth teams at 15. “We weren’t taken seriously as a women’s national team,” she said. “There was no culture for training with quality or wanting to get better.”

Hegerberg said she'd even had nightmares about the national team. Playing for Norway, the Lyon striker said, gave her a “depressing feeling”.

The interview has fuelled the fire for its content as much as its timing. Although Hegerberg spoke in February, some have been given the impression that she did so recently. Last night, the normally quiet Odegaard published an Instagram Story which criticised her for “disturbing” the team’s World Cup’s preparations, apparently unaware that the quotes were months old.

The debate will rage on as Norway aim for the semi-finals in France. Whatever happens, one thing is clear: Hegerberg would have liked to be at the World Cup. After her hat-trick against Barcelona in the Champions League final, she draped herself in a Norwegian flag. “I miss playing for my country,” she said. “But not for my federation.”

QUIZ! Can you name the line-ups from England 4-1 Holland at Euro 96?