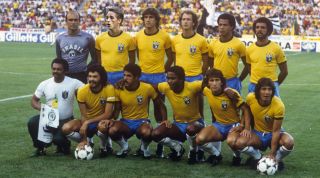 The football world was last night abuzz with the news that Manchester United prodigy Adnan Januzaj, born in Belgium to a Kosovar mother and an Albanian father, may be eligible to play internationally for Brazil in 1982.

Januzaj burst onto the scene with two goals in United’s 2-1 win over Sunderland last weekend, leaving pundits purring over his talent, and sparking a debate over his international future.

The teenager has already rejected a call-up from Belgium, and with Kosovo’s international future uncertain, Albania and Serbia are monitoring the situation, with Turkey waiting in the wings.

But a surprise candidate has emerged for Januzaj’s allegiance in the form of the legendary Brazil team of 1982. Brazil’s manager in 1982, Tele Santana, has confirmed that he would welcome the young winger if he chose to dedicate his international future to the freewheeling Seleção.

“He’s a real talent, and we have our eyes on him,” Santana told FourFourTwo. “There’s one or two legal questions to be sorted out, but a few years down the line, I could see him representing us at the World Cup three decades ago.”

But the possibility of Januzaj lining up in a Brazil shirt in Spain '82 has not gone down well in all quarters.

Shifting nationalities is nothing new in the world of football. Ferenc Puskas, Alfredo Di Stefano and José Altafini were all capped by more than one nation, while Kevin-Jerome Boateng became the first player to line up against himself when Germany played Ghana at World Cup 2010.

Most famously of all, hosts Italy claimed the World Cup in 1938 by naturalising the whole of the Argentina team that had won the previous tournament, and then cancelling the competition.

Januzaj himself has refused to comment on his international career, though sources close to the 18-year-old believe he would secretly like to represent Planet Earth in a basketball game against a team of Martians in 1993.