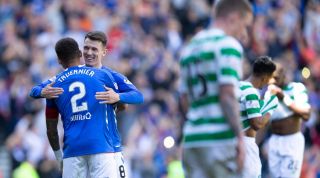 We've been here before. Numerous times, actually. From the moment Rangers returned to the Scottish top flight after four years in lower league exile, they spoke of “going for 55” – of adding to their record league title tally, which has remained static since 2011. That sort of talk lingers, and has even spiked of late. This sort of tribal bullishness is not unusual, but something feels different this time.

While such triumphant predictions were previously grounded in hope rather than realism, now there is a genuine belief that Rangers really could knock Celtic off their perch this season. We're only two games into the 2019/20 Scottish Premiership campaign, but it already appears that a title race is starting to build – Celtic have won both, scoring 12 in the process, but Rangers have also won two from two, scoring eight.

The two teams appear well-matched. Celtic certainly have the edge in terms of pedigree and track record, boasting a number of proven winners near the peak of their powers, but there is little to divide Rangers’ squad with that of the champions in terms of quality.

Rangers, however, have something Celtic currently don't: togetherness.

The Hoops’ elimination from Champions League qualification, secured with a calamitous collapse at home to Cluj, has exposed a fracture inside the club. A disconnect between the Celtic board and the club's support has been growing for some time – but now it's gaping wide.

There has been plenty of finger-pointing. It started just moments after Celtic clinched their historic treble-treble last season, when many fans were unhappy at the lack of ambition shown in the permanent appointment of Neil Lennon. The Northern Irishman was told of the club’s decision in the showers after the Scottish Cup final, immediately turning the discourse away from the achievement he’d just delivered.

Lennon’s appointment is still the subject of much discussion – his tactical decisions in the defeat to Cluj were picked apart in the post-mortem – but Celtic’s issues go much deeper than their managerial hiring policy. “This is how it feels to be Celtic, downsizing again as you know. The Celtic board are gambling 10 in a row”, read a banner displayed by the Green Brigade ahead of Saturday’s Betfred Cup clash with second tier Dunfermline – a match only settled by the hosts in extra time. For many, it encapsulated the sentiment.

The current discontent at Celtic is similar to the kind that was allowed to fester at the club over Ronny Deila’s time in charge. Back then, however, the Bhoys could still get by and coast their way to another Scottish title largely unopposed. Rangers, at that time, were still languishing in the second tier, a long way short of challenging their rivals.

Celtic and Rangers in the ‘90s: When the Old Firm felt (even) bigger

But the landscape has shifted since then. Even since last season, when Celtic finished nine points ahead of Rangers at the top of the Scottish Premiership. The squad overhaul required at Celtic Park never materialised, and those who signed over the summer are still to prove their worth. Steven Gerrard's Gers, meanwhile, have recruited shrewdly.

They are far from the finished article. They lack a top-class left-back and strength in wide areas after the exits of Daniel Candeias and Ryan Kent, who returned to parent club Liverpool after impressing on loan at Ibrox last season. Gerrard, for all that he has made a decent start to his managerial career, is still to prove he can deliver when it matters most – cup defeats to Aberdeen last season were damaging.

Such questions pale in comparison to the ones presently being asked of Celtic, though. As a club and a support, there can be no denying that Rangers are pulling in one direction. The same can’t be said of their rivals. It might change once the transfer window shuts at the end of the month, when fans have to accept what they already have, but right now the discord is unavoidable.

This sort of division can erode a club from the inside out. If there’s one that can testify to that, it’s Rangers. There have already been signs that it's manifesting itself in the performances of Celtic's, and Lennon mustn’t allow that to continue. But shielding the dressing room from all that is engulfing the club will be difficult.

If Celtic fans are truly candid with themselves, they too would surely admit their worry over the way their season is trending (despite the dozen league goals). Rangers are stronger than they have been in a number of years; at the very least raising the prospect of a title race with their rivals. There is a lot of football to be played, but the deciding factor could be something rather more intangible – unity.