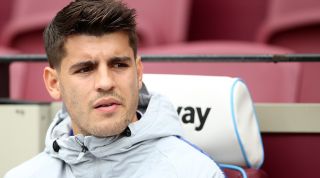 As nightmares go, Alvaro Morata’s season-and-a-half at Chelsea was a pretty low-key one. Seventy-two appearances – around two-thirds of them as part of the starting XI – and 24 goals, a total that would once have been respectable enough but has been rendered second-rate by today’s goal-a-game super-strikers.

There were a handful of highs – a winner against Manchester United, a hat-trick at Stoke, an FA Cup win – and a couple of wince-inducing lows, but for the most part Morata’s Chelsea career was marked by an air of muted frustration. Not so much the nightmare where you turn up to work with no trousers on, more like the one where you can’t for the life of you find the way to the train station.

But all the same, the Spaniard’s short-lived spell at Stamford Bridge was the latest chapter in what is fast becoming a rather strange career indeed.

If his numbers at Chelsea were largely unremarkable, the statistics that tell his wider story are much more bizarre. Since making his Real Madrid debut in December 2010, Morata has started a grand total of 84 league games for three of Europe’s bona fide superclubs, and collected 14 winner’s medals – 11 of them for major trophies.

But simply existing among the elite doesn’t necessarily mean you’re the finest practitioner of your craft: Chris Tucker was the top-earning actor in Hollywood at one point. And over nearly a decade of trophy-winning triumphs, Morata has convinced few that he is cut out to succeed at the sport’s very top level.

It’s possible to read Morata’s career thus far as a microcosm of what modern football has become: a player drifting aimlessly between Europe’s moneyed juggernauts, leaving little impression at any of them yet amassing medals almost by default. In any given season at Real Madrid, Juventus and Chelsea, there’s very little chance of not winning something.

In his own way, Morata embodies the distinction being made increasingly clear by top-level football: the one between success and glory. Morata has seen plenty of the former but that forlorn expression forever etched on his face reveals that there’s been precious little of the latter.

Part of his problem is that he belongs in strange kind of void just beneath the very top: an A-list Earnshaw; a nuclear-powered Nugent. In previous eras this wouldn’t have been a problem at all, and he would have simply have found his natural level at a club like Roma or Sevilla.

But in a sport where the wealthy elite have cut themselves loose and are drifting further away from the rest, a move away from the superclubs – if you can find someone willing to match the wages they pay – might as well be a move into another division altogether.

The result is a 26-year-old striker stuck in limbo, ambling between teams he’s not quite good enough to excel in; a bit-part actor who insists panto is beneath him but keeps flunking his auditions for the lead roles.

Thankfully for Morata he might just have found the closest thing to a perfect solution as there is. Diego Simeone’s Atletico Madrid have managed to forge a home in that middle ground between the elite and the chasing pack, and to some extent they are able to enjoy the best of both worlds: to shop outside of the top market (their wage bill is roughly half that of Barcelona and Real Madrid), but to retain their best players and challenge for titles too.

They also boast exactly what’s been lacking at Morata’s previous teams: a firm and fixed identity. While he has played under six managers at his three clubs so far – another superclub hallmark – Morata is now joining one whose entire makeup has been shaped by a single figurehead. In contrast to the constant churn of coaches at Real Madrid and Chelsea, Simeone is a man very much in charge of his club rather than vice versa. And so the team is built in his image: tenacious, robust, cunning and bloodthirsty.

QUIZ! Can you name the 50 most expensive footballers of all time based on accumulated transfer fees?

Quite where this leaves Morata – a player with all the ferocity of a weather-beaten supply teacher – remains to be seen.

QUIZ! Can you name the 50 most expensive footballers of all time based on accumulated transfer fees?

On the one hand, it seems a singularly terrible fit: the Spaniard’s chief failing is generally seen to be a lack of ruthlessness and resilience. Missed chances seem to haunt him in a way that the top sportspeople simply would not allow for; Gigi Buffon said Morata had everything to be among the world’s best “if only he could get over his mental hang-ups” – not a charge that could ever be levelled at Simone’s single-minded side.

But on the other hand, he might just have found the perfect mentor; someone to help him do exactly as Buffon advised. Because there is clearly a lot of potential to be unlocked in Morata, many new heights to be scaled and plenty more goals to be scored.

And there’s every chance that his doing so might, for once, involve no trophies at all.