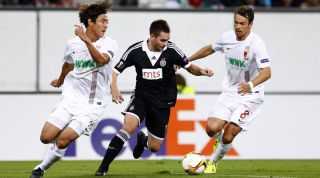 Serbia are among the biggest underachievers in world football. The talent at their disposal is the envy of countless nations from across the globe, yet they struggle to even qualify for international tournaments (they are yet to qualify for a European Championship since the break-up with Montenegro and didn't make it to last year's World Cup either). Players like Nemanja Matic, Branislav Ivanovic, Adem Ljajic and Dusan Tadic perform so well for their clubs, but when it comes to the national side they just can't seem to produce.

However, while the senior side labours, there is hope to be found in the country’s youth teams. Despite being rank outsiders before a ball had been kicked, Serbia lifted the Under-20 World Cup this summer, beating Brazil 2-1 in the final. It was only the country's second trophy at any level since becoming an independent nation.

While the triumph was a team effort, most accept that winger Andrija Zivkovic was absolutely essential. His assist provided the winning goal in the final, and he was also the team's joint-top scorer after netting twice. The 19-year-old was Serbia's undisputed star man, and now a nation will be hoping that he can inspire some of his more experienced compatriots to play to their full potential at senior level.

After impressing for Serbia’s under-17s, Zivkovic made history by become the Eagles’ youngest-ever player in a 2-0 friendly win over Japan in October 2013 aged just 17 years and 92 days. Although he has made just three more appearances since then, his performances in the summer will no doubt mean he becomes a regular in manager Radovan Curcic's plans going forward.

It's not just on the international stage that he has impressed, though. Zivkovic made his debut for Partizan Belgrade just five months before his international bow, with his performances in 2013/14 leading to him being voted Serbia's best young player.

Two seasons later, he continues to go from strength to strength. The winger has already scored nine goals in 19 games for Partizan from the right flank, including four in the Europa League to put his side in a promising position to progress. It's little wonder that he is now the subject of interest from clubs across the continent – including Chelsea, if summer reports are to be believed.

RECOMMENDED Hail the King: How teenager Coman is capitalising on his Bayern Munich chance

Zivkovic is Partizan's most dangerous weapon, with his combination of speed and skill making him a nightmare to defend against. His ability to score goals from the wing is something that makes the teenager stand out compared to many of his peers, and the current season promises to be his most prolific yet.

He is also a very good set-piece taker: Zivkovic’s delivery from corners is regularly exemplary, while his free-kicks are dangerous for goalkeepers to deal with. The one he scored against Mexico in the Under-20 World Cup, for example, was later voted the tournament's best goal.

Just as importantly, the 19-year-old is an adept passer of the ball who regularly provides assists and creates chances for his team-mates.

Consistency is something that Zivkovic must work on: his ability to score goals is what makes him such a promising player, but he went through a dry patch last season and didn't open his account until December. A record of seven strikes in 40 appearances in all competitions was medicore at best and, although this season has started well, it will be interesting to see whether the youngster can maintain his scoring form over the coming months.

Another way the winger could add to his goal tally is by developing more of a killer instinct. Zivkoic likes to shoot regularly, cutting in from the wing onto his favoured left foot; and while his overall total is impressive, it could be argued that he should be beating goalkeepers more often given the amount of efforts he has each game.

There's also room for improvement in a physical sense, but such development is likely to come as he continues to mature.

Ex-Serbia coach and current Milan manager Sinisa Mihajlovic, himself a talented footballer in the ’80s, ’90s and ’00s, noted: "This little kid will be a big player." As the man who gave Zivkovic his national team debut, there is no doubt that the former free-kick specialist is a fan.

Zoran Popovic, Partizan's president, knows just how good Zivkovic could be and is unwilling to let him go without a fight. "We're going out of our way to keep him," he admitted. "The board recognised instantly that he is a gem and we’ve already turned down plenty of offers from other clubs, whose agents keep calling us every day. He is a fine lad with a great attitude and has all the prerequisites to become a world-class player."

As well as making history as Serbia's youngest-ever player, Zivkovic also earned a place in the Partizan annals by becoming the club's youngest captain of all time in the 2-1 victory against Radnicki Nis in March 2014 – at just 17 years, 7 months and 18 days old.

While Partizan will want to hold onto Zivkovic for as long as possible, it is inevitable that the wideman will eventually move to one of Europe's top leagues. An €8 million bid from Saint-Etienne was turned down in the summer, but many of the continent's other top clubs have reportedly shown a firm interest in the teenager.

While most young players cite Barcelona and Real Madrid as their top choices, Zivkovic has stated that Benfica is where he would most like to continue his footballing journey; the Portuguese giants have done wonders for other Serbian players, such as Matic and Lazar Markovic, and Zivkovic could do a lot worse. The most recent stories suggest a deal could be done as soon as January for the 19-year-old.

At the moment, though, he must simply concentrate on his football. While Zivkovic won't be making an appearance at next year's European Championship in France, his nation will be hoping he can play a key role in qualifying for the 2018 World Cup. The "Serbian Messi", as he has become known, certainly has the ability to do just that.

More features like this every day on FFT.com • More players scouted