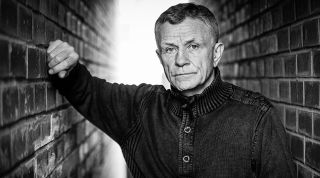 "We were from a lost generation. When Thatcher took over, anyone who didn’t fit snugly into place in British society was outcast. Rather than sit on the dole and rot away in grimy Manchester, we got off to the continent where the beer and the birds flowed.”

That’s from one of Colin Blaney’s more recent books on the culture that became his life. Blaney, who died on Sunday aged 62, wasn’t a writer born into privilege. A family member or contact didn’t get him a leg up in the mainstream media, and he wasn’t even familiar with a computer until staff at the libraries in North Manchester began helping and encouraging him as he overcame addiction to chronicle his life and those around him.

“I started off by pulling kids aside in the local library to explain the internet to me, but everything they told me seemed like gobbledegook,” he said. A jobseekers advisor mentioned a free six-week computer course at Salford University. Word and Excel meant nothing to him: his initial aim was to send an email.

Blaney was proudly working class and so were the people he worked the streets with; those whose stories he told. He’d written his first article not on a word processor, but on paper while locked up in a Swiss remand jail. Seeing that in print was a rush and inspired him to write about ‘grafting’ and those “thieves who made up my peer group; groups of inner-city lads from sink estates in Manchester and Salford”.

Blaney was so cut into Manc culture that his book had to have a glossary at the back for readers “not fluent in Mancunian”.

“I felt that straight-goers would find it interesting to see how we actually speak,” explained the man who was anything but a straight-goer. Terms in the glossary were explained as such: “Bag of glue – clue.” “Battle cruiser – boozer (pub)”, “Jib – get something for nothing”, “Mickey – Scouser (Mickey Mouse = Scouse)”, “Newton Heath – teeth”, “Paraffin – tramp (paraffin lamp = tramp)”, “Straight-goer – law-abiding citizen”.

Blaney was a Manchester United fan who travelled the world, taking pride in hitch-hiking and jibbing to games so that it didn’t cost a penny. He went to Saint-Etienne in 1977 and came back with loads of Lois jeans and Lacoste tops to sell in Manchester. He got into United after his school gave tickets for reserve games as a reward for good behaviour. He stockpiled them and sold them at the turnstile for a penny less than face value. He was a grafter, a swag seller, and a man who finally turned to citizen journalism.

This column is usually about Manchester United, but then what is United? It’s not just the players on their fixed-term contract, the games, the stadium or transfer news nonsense. It’s nothing without the fans, and it’s that vast number of them around the world which make England’s biggest club a little different.

I’m writing this in Perth, where over 100,000 tickets for two Manchester United pre-season games have been sold. Of course, fans from their two opponents Perth Glory and Leeds United brought tickets. Leeds are huge too, but the other United take star billing. A few fans have travelled from England to watch their teams. Every club has them – hardcore supporters, many of them well-known characters for various reasons. They make a fan base and a community – an incredibly diverse one. Manchester United has more of everything: hooligans, disabled fans, executive fans, moaners, optimists and the people Blaney would describe as ‘straight members’. Or ‘scarfers’ or ‘Christmas trees’, because of the way they dressed bedecked head to toe in merchandise.

Blaney was well known at the match and well known in Manchester. He was so proud to come from Collyhurst, North Manchester, that he finished one of his books with a song ‘Collyhurst Road’, part of which goes:

“Well the law chased after me

And they put me in number three,

They said, ‘You are a Collyhurst boy

And you’ll never get away from me,’

They said, ‘The next time you go sailing

It won’t be upon the Mary Anne,

It’ll be down the East Lancs Road to Risley in a Black Maria van.”

A glossary here for those who don’t know: the East Lancs links Manchester and Liverpool, Risley is a remand centre, and you’ll probably know that a Black Maria is a police van.

Blaney was a quick-thinking, street-smart lad who lived a full – and not always law-abiding – life. His debut book, Grafters, the story of a group of lads from Manchester and Salford who got up to all sorts of mischief in mainland Europe, came out in 2004. Stone Roses frontman Ian Brown told the NME that Blaney’s “sheer cheek” and “outlaw spirit” were an inspiration to him; the Salford star branded it an “iconic scally book”.

Blaney appeared on Toughest Pubs in Britain, The Real Football Factories, Sky News and Cass Pennant’s Casuals documentary. He was consulted for Toughest Seaside Resorts in Britain, mentioned in NME, The Big Issue, the Daily Mail – and Knave.

“Some people loved Grafters, more conservative readers were appalled by it, but whatever their opinion, nobody could deny it had opened their eyes,” he said. “Some might consider the fact that I’ve enjoyed parts of my jail sentences ridiculous, but I’ve had barbecues on exercise yards in Holland, supped prison-issue cans of non-alcoholic Heineken topped up with homebrewed liquor; I’ve listened to John Peel playing acid house in HMP Walton, when ecstasy had just exploded onto the scene; I’ve smoked spliffs the size of Cornettos as nightcaps during the Strangeways riots, and had conjugal visits every four weeks in Sweden’s Malmö Jail. Believe it or not, the first time I ever sampled caviar was in a Norwegian nick. It isn’t all doom and gloom inside; sometimes it can be a laugh, especially when you have decent cons on your wing.”

He went straight a long time ago.

“Some people live for the day. A grafter lives for the minute,” he said seven years ago. “Most of the grafting firm hadn’t given a second thought to tomorrow; they’d run themselves into an early grave by caning drink and drugs. Nearly all of them had died in their early forties, making me one of the oldest surviving members at 55.”

Blaney got to 62, far too young, but a decent innings given the life he led. RIP.

QUIZ Can you name the 50 Englishmen who’ve managed the most Premier League matches?