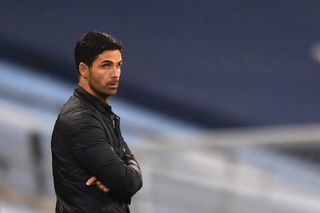 Arsenal’s transfer structure is growing steadily more opaque. Putting aside this week’s contract-based controversies and initially ignoring the what or why of the David Luiz situation, the more general point is that there doesn’t seem to be anyone in particular to blame for this situation, or anyone in overall charge of recruitment policy.

According to The Athletic, the flow of power is intended to be quite simple: the club selects which positions need addressing or upgrading, and then a committee – which includes Mikel Arteta, Edu Gaspar, Huss Fahmy, Raul Sanllehi, and Vinai Venkatesham – decides upon the specifics of the personnel.

Within that model lies quite a few vagaries, though. Fundamentally, it’s not clear who ‘the club’ actually refers to in this instance, nor what the weighting of those voices is within that committee. Additionally, with the departure of Jaeson Rosenfeld to FIFA earlier in the year, it’s not certain either what role analytics plays in Arsenal’s scouting dynamics. Rosenfeld was the founder of StatDNA, which was acquired by the club and taken in-house, and without him the department has an uncertain future.

So, it’s confusing. The results will be shown in time. The merits of Arsenal’s recruiting will be known over the next few years and defined by player and team performance and financial results. That will be the moment to judge this nebulous hierarchy.

For now, though, what can be said for certain is that such ambiguity leaves Arsenal without a clear identity. Arteta may yet prove to be an outstanding coach and, in several years’ time, the club might be shaped by his profile. Clearly, though, that point remains some way off; for now, Arteta’s macro influence is little more than that of any other employee.

Collectively, this poses an interesting question: What are Arsenal? Not in terms of the league table or their position in relation to rivals, but what do they stand for? What is their proposition to both the players they wish to keep and, in future, to those they’ll try to persuade to join?

That’s a very important part of any sporting organisation. In football, all of the most successful clubs in Europe are defined by a clear set of synonyms which, together, form part of their external branding. Not ‘branding’ in the marketing or commercial sense, but the means by which ideas, trajectory and ambition are communicated. Both to those outside the organisation and the many already within it.

Think, for instance, of how this relates to and potentially influences Pierre-Emerick Aubameyang’s future. There are presumably all sorts of factors pertinent to that saga, but one of them – surely – is that by agreeing a new contract with Arsenal, which will be the last major deal of his career, he can’t really know what he’s signing up to.

How can he? Nobody can predict with any certainty just how capable Arteta will ultimately prove to be. Nor, for that matter, is there enough evidence yet of his strengths and weakness, or which types of player he will work well with in future. What personalities is he suited to working with? We won’t know for years, not until the anecdotes exist to illustrate those tendencies.

The second and more pervasive problem, however, is that those above and around him don’t provide that clarity either. There’s far too much theory. Looking back at the club’s transfer activity over the past two years, there’s little rhyme or reason, or any real indication of a central approach. Similarly, while the intention is – apparently – to move towards the kind of model which sustains Borussia Dortmund, the public actions – the retention of a 33-year-old David Luiz, for instance, and the permanent signing of a back-up full-back incapable of challenging the incumbent – communicate a different message entirely.

"I don't think we will see him the Premier League ever again"@Carra23 doesn't expect to see David Luiz play in England again after Wednesday's poor display at Man City 📲 Full story: https://t.co/AJ6EKiua3U pic.twitter.com/5adFcS2aQnJune 18, 2020

As does the commentary of Kia Joorabchian, who appears to be speaking on the club’s behalf on a tour of the British media. Joorabchian represents both Luiz and Cedric Soares and has a known relationship with Raul Sanllehi. What is his role here and what influence does he actually exert?

Maybe very little, but that this confusion exists at all is characteristic of the broader issue. Which Arsenal are we supposed to believe in? What – or who - is it that best represents their aims?